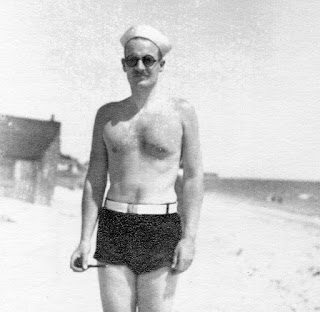 The label on the snapshot said 1938, nine years before I was born. The beach was probably on Cape Cod, though it could also have been somewhere on the shore of Lake Ontario. The mustache was an uncommon detail; I remember him growing one on brief occasions in my childhood. The sailor hat was his concession to his early developing bald spot. The pipe was his signal of adulthood, constantly fingered, usually unlit.

Like so many young people today, he came into adult life (in the early 1930s) just as his country fell into Depression. In that decade, he never found a coherent career path, bouncing from odd job to job. He didn't really get settled into stable employment for another 15 years. I'm sure that grated on him: he believed his male purpose was to provide.

But here there's a youthful hopefulness in his gaze. He would have been 33. I never knew him looking much like that. By the time I came along, there'd been a terrible war; he was too old to be drafted into World War II, so worked at accounting in a wartime aircraft factory. When I knew him, he seemed to think the world around him a pretty grim place.

But he tried to do what he conceived of as his duty and to be kind. What more can any of us do?
Posted by janinsanfran at 8:06 AM