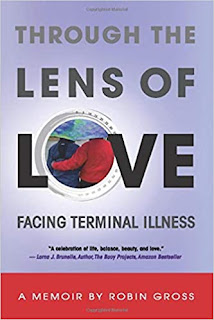 For their fortieth wedding anniversary, Dick and Robin joined a photography trip to France, a couple of happy empty-nesters contemplating immanent retirement and vigorous further exploration of their art form. Within a month of returning home, Dick fell ill and was diagnosed with glioblastoma, a fatal brain cancer that allowed them only a short, uncertain future of unknowable duration. Robin Gross' memoir, Through the Lens of Love: Facing Terminal Illness, recounts Dr. Gross' professional life and accomplishments, the course of his illness, and the community that formed around them and held them tight over the two years of Dick's survival and gradual waning.

Above all this is a love story. These two had found their perfect soul mate in each other.

How would I survive without him? We were a team. I could never go on by myself. ..

A friend who had known loss offered advice.

Gena’s letter reminded me that we still had each other and could talk about our lives together, share our love, experiences, and memories, and comfort one another through this difficult journey.

And this they did. Dick retired abruptly, struggled to hand off his patients responsibly -- and then turned to caring for how Robin would live after he would be gone. He insisted on their moving to a smaller place in an elder condo community in a nearby town, a residential development with plenty of community facilities and a lively Jewish community with which they could affiliate. And, somehow, they got the move done and all the little details of set up and decorating in the new place completed before Dick deteriorated so much as to be unable to help.

And meanwhile, in the short time they had left, they lived.

[A counselor] wanted to know if Dick was experiencing some kind of euphoria or if this was his normal personality. I assured her it was just who he was. He certainly understood the reality of his terminal illness, but he was not going to waste time getting angry or depressed over it. He wanted to live life. He wanted to enjoy the good times. He saw the best in everyone and everything. He was truly grateful for every day.

... we loved jumping headlong into enjoying the moment. This was our new philosophy of life. Although there were often challenges, we didn’t waste time worrying about the elements and the logistics. We just said yes.

They had always loved travel and though they no longer attempted international jaunts, they still flew about the country visiting friends and family and enjoying theater and concerts.

And they found joy in the community that gathered to assist them.

Through the two years of Dick’s illness, we witnessed the hand of God in the people who helped us. I was constantly amazed at the outpouring of love and assistance from family, friends, patients, and acquaintances. I began to form a new understanding of God as residing in people. The power of goodness was so strong, it felt tangible.

... I did not get the miracle I prayed to God for in those first nights of diagnosis. But I got miracles of a different sort: a miraculous husband who accepted his prognosis with courage and grace and focused his energy on making life the best it could be, and a miraculous community of people who carried us through our journey.

Inevitably, eventually the cancer won. Dr. Richard Gross died at home with Robin, surrounded by family, two years after they had discovered the tumor.

Robin's story is harrowing -- and oddly inspiring.
...
This is not, perhaps, a book for everyone. Dick and Robin, as she portrays them here, lived in an apparently untroubled, upper middle class white suburban world. They performed traditional gender roles apparently without questioning. They seem utterly conventional. Yet Robin has shared a portrait of a relationship that feels exceptional in its depth, bravery, decency, and imagination.

I met them through unlikely happenstance. Robin and Dick were members of our party when we hiked Mt. Kilimanjaro in 2002. Robin tells something in her memoir of how Dick saved the life of a Tanzanian porter during that high altitude ascent; I've told my version as well. Dick was a very special person -- blessed with a partner equal to him in the pain and joy of love.
Posted by janinsanfran at 8:00 AM

Email ThisBlogThis!Share to TwitterShare to FacebookShare to Pinterest
Labels: booktalk, gone but not forgotten