California's Prop. 209 will be on the ballot again this fall -- this time as Proposition 16. At long last, voters will be asked to repeal a measure approved a generation ago amid an eruption of white people's panic about the state's growing racial and cultural diversity. Under this legal provision, the state is forbidden to take into account race and gender in our civic life. 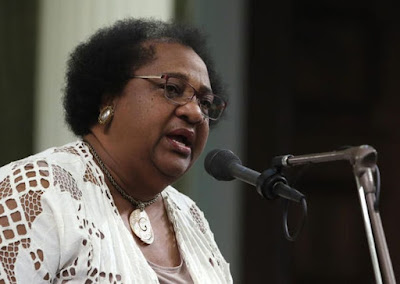 The lead legislative sponsor of the measure, Assemblywoman Shirley Weber of San Diego, explains how, in a spasm of fear, we hogtied racial and gender justice.

Enacted in 1996, Proposition 209 — which was deceptively marketed to voters as a civil rights initiative — removed essential tools to fight discrimination against women and people of color. Far from leveling the playing field, it set up obstacles to success for millions. In the six years that followed Proposition 209’s passage, contract awards to women business enterprises dropped significantly from 6.7% to 3.8%. In the following two decades, California’s minority and women business enterprises lost the potential equivalent of $1 billion annually in public contracts.

Since Proposition 209’s passage, California has become one of only eight states that do not allow race or gender to be among the many factors considered in hiring, allotting state contracts or accepting students into the state’s public colleges and universities.
Despite our position as a global leader, this law has allowed discriminatory hiring and contracting processes to flourish in California. The result is that the number of women and Latinos employed by the state of California has decreased significantly relative to population growth.

In 1994, Latinos were admitted to the UCs above the average rate, and African-Americans at 6 points below average; in 2019, they were admitted at 6 points and 16 points below average, respectively. Asian American admission rates went down, and have not returned to previous levels, especially at the most selective campus in the UC system. For example, before Proposition 209 in 1996, the Asian American admissions rate at UC Berkeley was 32%. Two years later, it was 30%. Currently, it is 21%.
San Diego Union Tribune, June 9, 2020

We can climb out of this hole we dug for ourselves by passing Weber's constitutional amendment. 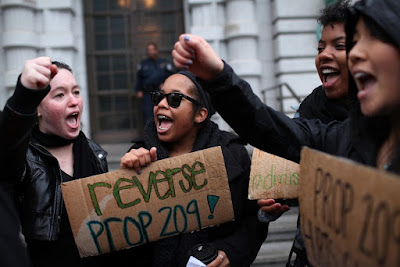 It's hard for anyone under 45 to imagine, but not so long ago, California was in many ways the most Trumpian place in the country outside the old South. The older white electorate was simply scared stupid of the emerging plurality of people of color -- Black, Latinx, and of various Asian origins. Republican politicians spent the decade of the 1990s offering this frightened electorate tasty meals of bigoted fodder that promised the impossible -- to interrupt and impede demographic reality.

So, the state voted in Prop. 187 that California rejected immigrants and that undocumented people should have no access to state funded education or health care. (Prop. 187's hate agenda was never fully implemented because of court challenges; Trump has come far closer than 1990s California ever did.) Later California outlawed bilingual education (repealed 2017) and multiple measures aiming to jail Black and Latin offenders and throw away the keys (chipped away at via Prop. 36 in 2012 and Prop. 47 in 2014.) Prop. 209's ban on affirmative action is the only pillar of that nasty decade of white backlash initiatives still standing.

Young Californians know that Prop. 209 has got to go. Sally Chen grew up in San Francisco as the daughter of working class Chinese immigrants. She wanted to write a college essay that built on what her life experiences had taught her -- but was advised she couldn't if she was applying to the California university system. Since she was a top student, she ended up at Harvard where courts have agreed that the private university can look at life experiences involving race, ethnicity and gender as part of the admission process. But what about all the other students who are not quite such stars? She remains horrified by the narrow lens California sought to force her into:

My race is an essential part of who I am – both in my pride as a Chinese American and in the very real challenges my family and I have faced because of it.

Varsha Sarveshwar is the president of the University of California Student Association. She graduated this year from UC Berkeley and she believes voting for ACA 5 in November will be acting for equal opportunity for all:

Simply put, we can no longer pretend that race does not exist or that it doesn’t matter.

Students are far more complex than race alone, but race is undeniably an important part of who we are. This shapes the rich perspectives and experiences we bring to an academic environment.

Today, colleges can consider whether you’re from the suburbs, a city or a rural area. They can consider what high school you went to. They can consider your family’s economic background. They can look at virtually everything about you – but not race. It makes no sense – and is unfair – that schools can’t consider something that is so core to our lived experience.

Assemblywoman Weber took her repeal initiative to the legislature by speaking to the moment we're in:

"I'm so grateful I didn't have to convince you that racism is real, because George Floyd did that," said ACA 5's author...

California can affirm that race matters in November. Let's get on with it.
Posted by janinsanfran at 1:58 PM