From my clutter: virus vexations

Sunday morning, after services on Zoom, the attending members of our church community discussed what the prospects are for gathering in the flesh in the season of the coronavirus. Whatever else may develop, we agreed it would be crazy to pretend the pandemic was over. The virus still lurks among us.

It feels time to unload some of the oddments I've collected from COVID journalism. This thing is a mystery.

Scientists trying to suss the coronavirus out are often reduced to admitting they can't identify patterns, though they can document different impacts.

If you are in Belgium and have COVID-19, your odds are not good: About one in six Belgians who have contracted the disease have died. If you are in Rwanda, a former Belgian colony with a per capita GDP about 1/60th of Belgium’s, your odds are superb. Rwanda has reported 339 cases, and none has even required admission to an ICU. Rwandans are younger than Belgians, but zero is a very small number.

In Switzerland, a country with excellent universal health care, a French-speaking Swiss with COVID-19 is 1.6 times more likely to die than a German-speaking Swiss. An Italian-speaking Swiss is 2.4 times more likely to die than a German speaker. The magnitude of these disparities is comparable to the magnitude of the disparities among white, Latino, and black people in the United States—even though there is no modern history of enslavement and genocide of Switzerland’s Italian-speaking population. (Ticino, the center of Italian-speaking Switzerland, ranks seventh out of 26 cantons in per capita GDP.) You might be tempted to attribute the disparity to the Italian speakers’ connections with the death zone of northern Italy. That could account for the difference in the incidence of the disease—but why the difference in the likelihood that you’ll die, if you already have it?

What is documented in San Francisco is that the disease is tearing through Latinx and Black communities and disproportionately killing infected people of various Asian origins, while not being nearly so deadly to white residents.

When our medical system tries to understand the discrepancies, further conundrums arise. The focus of study must look away from individuals to social forces, according to Statnews.

“Policymakers’ natural instinct is to think this correlation is because of income disparities, or having health insurance, or diabetes, obesity rates, smoking rates, or even use of public transit,” [M.I.T. economist Chris] Knittel said. “It’s not. We controlled for all of those. The reason why [Black people] face higher death rates is not because they have higher rates of uninsured, poverty, diabetes, or these other factors.”

The Sutter study, too, adjusted for age, sex, comorbidities, and income; the higher hospitalization rate for Black patients wasn’t explained by any of those.

That leaves other factors. “If I were a policymaker,” Knittel said, “I’d be looking at things like the systemic racism that affects the quality of insurance African Americans have and the quality of the health care they receive.”

The county-by-county analysis of Covid-19 death rates in the U.S. comes as more and more studies shift from the initial focus on individual-level factors that seem to increase people’s risk of dying to population-level ones, too, said experts in public health, demographics, and infectious disease. 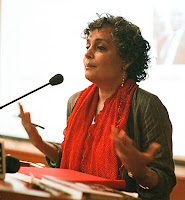 In some places, the pandemic has enabled communal violence. Indian novelist, essayist, and activist Arundhati Roy charges that the behavior of her Hindu nationalist government has been genocidal.

... the language being used by the mainstream media against Muslims was designed to dehumanise them. To paint an entire community as “corona jihadis” during this pandemic, when there is a pre-existing atmosphere of violence against Muslims is to create a genocidal climate.

... It was terrifyingly similar to how, during the rise of the Third Reich, Nazis began accusing Jews of being spreaders of disease, carriers of typhus. And the tone of the media – particularly channels like Zee TV and Republic TV began to sound like Radio Rwanda. These channels are specially rewarded by the [President Nahrendra] Modi coterie, granted exclusive interviews by him and his terrifying home minister. The horror show is ongoing. ...

Meanwhile, in its own casually imperial way, the U.S. government has been contributing to global confusion and likely unnecessary deaths.

US-funded website spreading COVID misinformation in Armenia
Medmedia.am was established with money from the Democracy Commission Small Grants programme, awarded to the NGO by the US embassy in Armenia last year. These grants, intended to “promote democracy”, are worth up to $50,000 a year.

In May, the site’s most-read page called on Armenians to “refuse all potential [COVID-19] vaccination programmes”. It has had 131,000 views and 28,000 social media likes (big numbers in a country with a population of less than 3 million).

The second most popular piece claimed, incorrectly, that a morgue offered 100,000 AMD ($205) to a dead patient’s relatives to sign a document saying the death was caused by COVID-19. Other recent pieces have described COVID-19 as a “fake pandemic”.

After this expose was published, the funding was cancelled. Thank you, alert reporters!

Leaders who are more concerned with preserving a macho public image put our lives at risk as they prove their manhood by showing resistance to experts’ opinions, hypersensitivity to criticism and constant feuding with anyone who seems to disagree with them.

Yes, they call out Trump. After all, they speak science.

Our church is not the only one struggling with how we should go forward in this time. An epidemiologist who has studied airborne transmission of the virus and serves on his church's safety committee urges caution. Scholars of religion are, as is their wont, collecting data on what religious institutions are actually doing in the time of the pandemic. John Turner reports:

As far as I can discern, the vast majority of American congregations have responded in responsible ways and demonstrated a concern for public health. Many congregations, moreover, have continued on with their efforts to feed the hungry and to assist the needy.

He's looking for further contributions for this study which can be uploaded at Pandemic Religion.

Meanwhile, our little church community decided for the moment that we're all in this together, even if we're distancing. We don't want to create risk by "opening" while the danger of infection continues, nor to divide ourselves by various partial expedients. Instead, we want to see if we can equip our people who might need cell phones so they can join us via Zoom. Solidarity trumps the desire to be in the same space, at least for now, and for the foreseeable future.
Posted by janinsanfran at 7:00 AM