So New York City has decided it's time to hide away this: 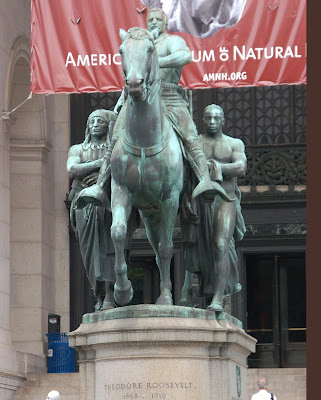 About time! This horror was erected in 1940.

Now can San Francisco get rid of this? 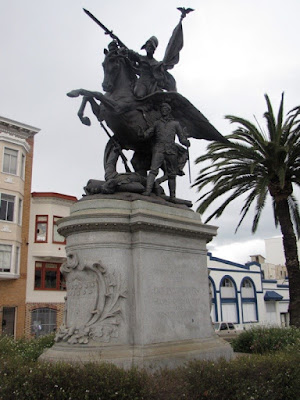 The statue at Dolores and Market Streets commemorates the U.S. imperial adventures in Cuba and the Philippines. Under the rearing horse's hooves there lies a blond fallen hero. He's not very representative of that war. Though the U.S. occupiers did suffer casualties, as has routinely been the case in our imperial wars, the local population bore the brunt:

The ensuing Philippine-American War lasted three years and resulted in the death of over 4,200 American and over 20,000 Filipino combatants. As many as 200,000 Filipino civilians died from violence, famine, and disease.

So wrote the U.S. government's Office of the Historian. This website comes with a note:

“Milestones in the History of U.S. Foreign Relations” has been retired and is no longer maintained.

An expanded note, defensive in tone, takes pains to explain that a review of the Office of the Historian was underway in 2016. But apparently the decision to retire this material was part of the Trump administration's cuts to the State Department. I suspect we have here historical revisionism to project a story more in tune with "Making America Great Again."
Posted by janinsanfran at 9:57 AM