A long walk through time and troubles 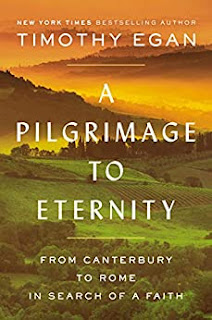 My prior familiarity with Timothy Egan was as an oped columnist for the New York Times who brought a western, Montanan, sensibility to the paper. I sometimes liked his writing. So when I learned he'd written an account of his traverse of the ancient Via Francigena, I knew A Pilgrimage to Eternity: From Canterbury to Rome in Search of a Faith was a book I wanted to read.

This turns out to be at least two books in one. The first is the historical travelogue. Unlike the Camino de Santiago in Spain (which E.P. and I walked in 2017), the Via Francigena is not well-marked, richly documented, nor overrun with pilgrims. Egan did the research to explicate the many artifacts of a complex Christian history along the way; this is story at its most vivid: monasteries, massacres, mysticism, miracles and all.

But what gives the book its heart is its exploration of what a Roman Catholic faith formed in the United States might mean to him today. That's not an easy cultural or spiritual position to occupy -- but neither is his heritage something that any Irish-American can lightly slough off. One expression of the anguish that grips him and his fellows is exemplified by this April 28 lament from an editorial by the National Catholic Reporter:

The capitulation is complete. Without a whimper from any of his fellow bishops, the cardinal archbishop of New York has inextricably linked the Catholic Church in the United States to the Republican Party and, particularly, President Donald Trump. ... The Catholic voice, capable of a priceless contribution to the public conversation, has been sold for cheap to political hucksters.

Egan goes on pilgrimage to try to figure it all out, what he can retain and what he must lose. He writes:

I'm a skeptic by profession, an Irish Catholic by baptism, culture, and upbringing--lapsed but listening, like half of all Americans of my family's faith. I'm no longer comfortable with the squishy middle; it's too easy. ... It's time to force the issue, to decide what I believe or admit what I don't.
... I start as a father, a husband, an American deeply troubled by the empty drift of our country. And for the next thousand miles or so, I will try to be a pilgrim.

Egan's pilgrimage was hard, materially, and physically, as well as spiritually. There were long days walked in nasty weather and uncertainty about whether he'd find somewhere to stay in the next town. He tore a tendon and limped on. There was a climb over snowy Alps that this very fit almost-elder found daunting. There were disabling blisters. And finally there was a gorgeous welcoming Italian landscape, where Egan speaks the language. To his own surprise, he begins to wonder whether there might be something miraculous locked away in a Catholic piety whose bloody history and abusive betrayals, he knows too well. And finally, he limps into Rome -- not snagging the papal interview his journalist self had hoped for, but carrying away his stamped pilgrim's passport proving he'd completed this long journey.

The Via Francigena is a trail of ideas, and it helps to walk with eyes open -- otherwise you miss the breadcrumbs of epiphany along the way. There's no Testimonium for the memories I'm loaded down with here at the pathway's end, but my passport is full. ... There is no way. The way is made by walking. I first heard that in Calais, words attributed to a homeless man, the patron saint of wanderers. I didn't understand it until Rome.

If the history of European Christianity, or the travails of American Roman Catholicism, or the possibilities of pilgrimage call you, they are all here and well worth wandering through.
Posted by janinsanfran at 7:00 AM