Now I know for sure we're living in a failed state 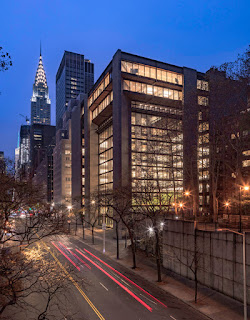 The Ford Foundation, the occupant of this glowing New York City headquarters, has chosen to issue bonds, payable in the far future, in order to increase its grants in this moment of pandemic, economic collapse, and necessary uprisings. According to the Times:

His solution: Borrow money, spend it quickly and inspire others to follow Ford’s lead. The Ford Foundation plans to announce on Thursday that it will borrow $1 billion so that it can substantially increase the amount of money it distributes.

Walker has lined up four other old-line, extremely affluent, charitable foundations to follow his lead. This is old money stepping up.

Walker at Ford is doing exactly what every progressive and even conventional economist has urged governments to do since 2008: when interest rates are near zero, borrow and push out that cash to build up social capital as well as needed infrastructure. This is what a functional government would do. Unhappily, Republicans have only been willing to allow the government to borrow to give a $1.4 billion dollar tax cut to their rich buddies -- and to their plutocrat in the White House.

So here we find private wealth doing what government ought to be doing. I guess we're lucky there's a Ford Foundation. (This was something I was less sure about back in the day when I was a supplicant. These institutions are awfully satisfied with their own virtue.) They could be doing far worse things with their $13.7 billion dollar endowment. Hitler-loving Henry Ford must be rolling in his grave. Give some of that money to the people who are setting the agenda in the streets!
Posted by janinsanfran at 2:26 PM