Working remotely on the Nevada primary

Yesterday Nevada held its primary election to determine which candidates for local and congressional offices would be the ballot in November. Because Democrats swept the state's offices in 2018, the state had put in place a lot of new election reforms to make voting smoother for all, including online registration, election day registration at the polls, and automatic restoration of rights for released ex-felons.

And then the virus hit. Nevada tried to make this election a largely vote-by-mail affair. Every registered voter was sent a ballot they could return, post paid. As long as their vote was postmarked on or before Election Day -- and properly signed on the outside -- it would count. There were a small number of county drop boxes for the ballots or voters could use the regular mail.

For Californians, this would seem simply a normal election. But voting-by-mail is a novelty in Nevada. Nevadans expect to enjoy about 10 days of neighborhood voting in local supermarkets and libraries before the big day. And the virus made that impossible. So legions of voters found themselves navigating an unfamiliar system if they wanted to vote.

The state Democratic Party used the primary to test systems in case they have to contest the November election in the midst of another wave of the pandemic. (Nevada is one of the states in which cases of COVID are currently rising ...) Erudite Partner and I tested the experience of helping with an election remotely by taking a few shifts answering the NVDems election hotline. The work felt both somewhat worthwhile and quite awkward.

The Dems used Dialpad, a commercial voice-over-internet system, to make and receive calls on the hotline. It worked fine, but its many-featured interface -- an advantage for most business use -- was overkill and confusing for a highly structured volunteer project. You didn't want volunteers clicking around on all those buttons, but it was probably inevitable that some people got lost in them occasionally. And the dialer's functions carried their ordinary labels rather than some customized set that would accord with what we were actually doing. For example, who would expect that to get to a list of recent calls you should click on "English"? For use in the fall with volunteers, systems either need to be customized for function or the training has to be long and detailed -- and even then the learning curve will be steep. (As it was in 2018 on the VAN voter database.)

To capture information about voter calls to the hotline, the Dems used "LBJ," which they claim means "Lawyers Building Justice." Okay, if you say so. Hotline volunteers had to manually transfer reports of each call from Dialpad to LBJ. In the latter system, they had to try to fit that information into a set of categories obviously designed to help election lawyers determine whether a legal irregularity had occurred. Those categories looked sensible to me, good for catching such all too frequent election screw ups as "I wasn't on the list" or "my polling place didn't open." But this wasn't what was happening in Nevada's first vote-by-mail election in the time of COVID. Most of what we encountered was more like "I didn't get my ballot in the mail" or "I've moved; how do I re-register?" Our instructions included useful answers; we could mostly help. But because the system was designed for a different use, what had happened on the call ended up in our own words in the comments boxes, not captured through the system's categories. Since this was a slow moving, low turnout election, the "boiler room" could actually read and digest the information volunteers captured and suggest we call back with additional help to the voter. That was fine this time around, but nobody is going to be able to do that at volume in the November crucible. A pandemic election needs a different data tool, I think. 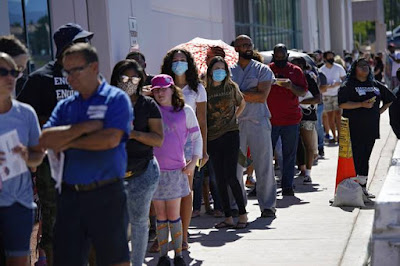 So how did the Nevada primary go? According to the Nevada Independent, In mostly mail-in election, voters who opt to cast ballot in person face long wait times. They provide a story of long lines at the tiny number of polling locations, mostly consisting of people trying to take advantage of same day registration and re-registration -- an entirely new option for Nevadans. The state DMV where this might have been avoided had been closed since March 13. Doing registration online was unfamiliar. And so these lines defeated the public health purpose.

It's kind of heartening to see that so many wanted to vote in a primary without a presidential draw. Let's hope not many get sick.

For November, there's a huge task ahead of voter and volunteer education ahead.

Posted by janinsanfran at 8:07 AM