This is not the economy we left behind in March

Welcome to the "omni-crisis." To an extent that's hard to take in, we are living in a different, and far less prosperous world and city. 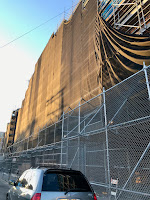 Construction sites are coming back to life throughout San Francisco, but the surge in activity may not last long.

Builders pulled 334 permits last week, up from zero 10 weeks earlier as the coronavirus shutdown took effect. That puts construction activity at about 58% of normal. In the year leading up to Mayor London Breed’s mid-March order for construction to cease, City Hall received about 580 permit applications a week.

If you look around, it's obvious that some projects are chugging along -- but also that something is wrong.

For the first time in years, there are "For Rent" signs in Mission District windows.

This month the median rent for a one-bedroom apartment in San Francisco dropped 9.2% from a year earlier, to $3,360, according to apartment-listing site Zumper. It was the biggest decline since 2015.

That's still too much for an awful lot of us. And some of the techies whose affluence drove up property values and rents have figured out they can work from home anywhere, including locations that are much cheaper than the City by the Bay. This won't help a lot of people who are here and trying to stay.

In April, almost 6% of city tenants were unable to pay rent because of financial hardships related to the COVID-19 pandemic and local order to shelter in place, according to an internal survey by the San Francisco Apartment Association. A study by the California Policy Lab found that nearly 18% of the city’s workforce filed for unemployment insurance benefits between March 16 and May 9.

Folks who aren't working aren't going to be able to pay the rent which landlords who acquired their properties at inflated values need to stay in business.

That is, everybody is screwed. 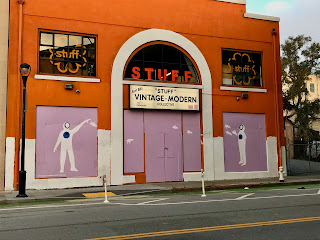 Meanwhile, small quirky retail businesses along Valencia Street are trying to figure out how to make a buck in a diminished retail environment.

Annika Hom has that story at Mission Local. These places are precarious at best. Lisa Sherratt, at Serendipity is a sole proprietor.

Pre-pandemic, Sherratt made between 50 and 100 sales a day, she said as she arranged the store’s brightly colored cards on the shelves. On Monday, she made 10.

“It used to be perfectly profitable,” Sherratt said.

It’s not only sales that have set her back.  Already, Sherratt missed April and May’s rent. Her landlord cut her June rent by 75 percent and asked her to pay just under half of July’s. Still, she’s uncertain of the store’s future. She is currently the store’s sole employee.

“Today I am paying $20 an hour for a babysitter and I am not earning anything,” Sherratt said.

We're properly pre-occupied by the horror and the glimpse of opportunity for real change let loose by local and national revulsion at George Floyd's murder. Humanity is enhanced when Black lives matter. And we're still captured within the unabated coronavirus emergency, even though the Quitter in Chief has gone out to lunch on disease response. All this amid this crashed, still not fully revealed, diminished economy.

At BuzzFeed, Tom Gara brings forward a useful description for this new world we inhabit: this is the "omni-crisis" -- three waves of pain and of potential breaking over us concurrently. No wonder we feel dazed. Anxiety is appropriate.

And then there's that election coming up in November ...
Posted by janinsanfran at 7:19 AM