Aftermath of the Mission district blaze

Yesterday I took a walk down Poplar alley where a fire destroyed several buildings a week ago. 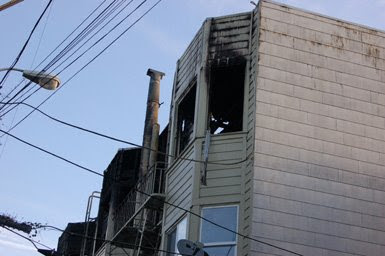 This is the same window from which flames shot out that terrible night. 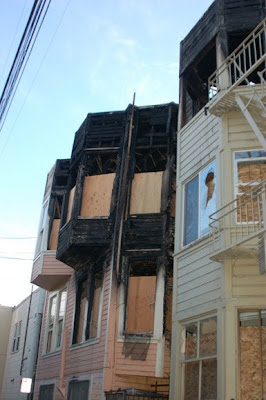 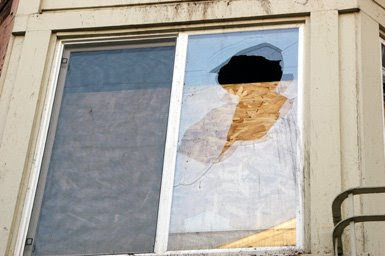 Even the lower stories where the damage is less look completely trashed.

Kevin Fagan wrote a very sensitive story in the San Francisco Chronicle about the plight of some fire survivors.

(03-18) 18:56 PDT SAN FRANCISCO -- On Monday morning, 59-year-old Griselda Paleo had a tidy studio in San Francisco with controlled rent that she could afford on her disability income. Friendly neighbors helped her when she got sick, and many spoke her native Spanish. It was "a nice, happy life," Paleo said.

Flames destroyed all that by nightfall.

Now she is homeless. Her community is gone. It will be virtually impossible for her to find another place in the city that rents for the $698 she has paid for 18 years, and she sees her independence dribbling through her fingertips. ...

For ... more fortunate fire victims, the main issues were how quickly they could retrieve their belongings and find new apartments. ... It was [the] dozen poor, elderly or disabled residents - like Paleo - who face the most daunting challenges. ...

Paleo isn't holding out much hope. She lives on an $850 monthly federal disability income for a debilitating, lifelong intestinal condition and epilepsy, and she knows there is little housing that her check can cover. She has been divorced for decades and lives alone.

"I have a sister and other family in Ceres (Stanislaus County), but I like the big city so much," said Paleo, who emigrated from Mexico with her family when she was 15. "I don't want to leave. I am afraid of starting a new life somewhere else."

I am reminded how precious and how fragile our urban communities are.
Posted by janinsanfran at 11:44 PM

I really feel for that poor dear lady and hopsomeone will come to her rescue. Getting old is hard enough without losing one's home.