The subjects are getting cheeky 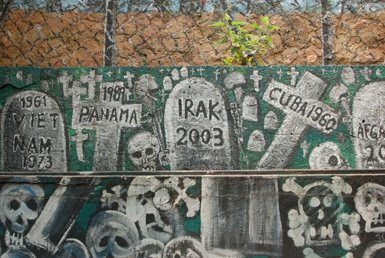 Detritus of empire; detail from a mural in Mexico City.

It would be hard to imagine a more striking vignette of waning U.S. imperial power under the Bush regime than this encounter described in today's New York Times. In the 1980s, John Negroponte was the U.S. proconsul in dirty wars against the uppity peoples of Central America, overseeing repression, torture and murder in El Salvador and Nicaragua from a base as ambassador to Honduras. Hondurans suffered directly from their military's devotion to preserving U.S. power. Today Negroponte is Deputy Secretary of State, on tour for the U.S. in Pakistan. And with its newly elected government, Pakistanis are getting restless, more interested in restoring their own freedoms by curbing the empire-compliant General Musharraf, than in pursing Washington's war on their borders against the Taliban. So this:

Perhaps the most startling encounter for the 68-year-old career diplomat was the deliberately pointed question by Farrukh Saleem, executive director of the Center for Research and Security Studies, at the reception Wednesday evening.

"How is Pakistan different to Honduras?" Mr. Saleem asked, a query clearly intended to tweak Mr. Negroponte about his time as ambassador to Honduras in the 1980s, when he was in charge of the American effort to train and arm a guerrilla force aimed at overthrowing the leftist government in Nicaragua. ...

The diplomat demurred, according to Mr. Saleem, saying, "You have put me on the spot."

In this country we may have to luxury of forgetting past imperial crimes, but the rest of the world watches and remembers.

Posted by janinsanfran at 5:39 AM

Email ThisBlogThis!Share to TwitterShare to FacebookShare to Pinterest
Labels: empire

Great story about Negorponte. It really brightens my morning.