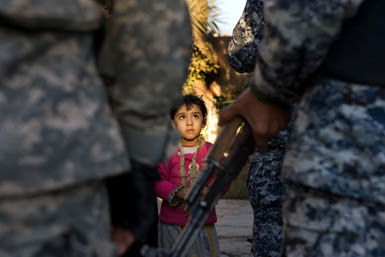 While we obsess about Democratic primaries, the agony in Iraq goes on. Last week I heard United for Peace and Justice national coordinator Leslie Cagan remind peace movement folks that we don't pay enough attention to what is happening to people there. She's right; it is so much easier to look elsewhere.

I thought I'd share some snippets from sources I use to try to keep up with Iraqi realities.

Inside Iraq is written by McClatchy News' Iraqi reporters. Here Laith and Jenan reflect on their prospects as journalists.

In Iraq, journalists are always targeted by insurgents. The last sacrifice was the head of journalist union in Iraq who was assassinated in cold blood few days ago. ...

I thought that the Iraqi government is watching this killing series with carelessness and they don’t do much to protect the life of journalists ... but today I found out that I was wrong.

Today I read in the news that the governor of Najaf allocated a piece of land for journalist. Before finishing the news, I felt happy for one second only because I thought the man had allocated properties for the journalists to build their houses in the safe city of Najaf but again, I was wrong. The land which was allocated for the journalists by his Excellency the governor of Najaf was inside the biggest graveyard in the world (Dar Al Salam cemetery)… it is allocated to build graves for us after we get killed by the insurgents. This is serious and it’s not a joke.

Is not that great? They think about us even after our death.

The chief of the McClatchy bureau, Leila Fadel, also writes a blog, Baghdad Observer. Here's a recent sample of her observations.

"This is the second ruler of Iraq," she said.

I looked at her.

"After Crocker," she said, referring to the U.S. Ambassador. She never mentioned the Prime Minister of Iraq, Nouri al Maliki. She expressed what most Iraqis feel, Iraq is a tug of war for power between Iran and the United States.

The blog Iraq Today does a terrific job of compiling a digest of news from and about Iraq. One of their links pointed me to this recent fascinating article by an AP reporter, John Affleck, newly dropped into Baghdad.

Take a short drive with me through Baghdad.

Feel the capital's rutted roads, see the blast walls blocking the side streets off main thoroughfares. The homes we're passing, even in nicer neighborhoods, look worn. Something else sticks out — dirt, dust and garbage. It hadn't registered at first, but now it makes sense: Nobody sends a street cleaner out twice a week in a war zone.

If anything, the Green Zone is worse when it comes to civic beauty. It's a completely disorienting place to a rookie, with roads running through a maze of gray blast walls. It's as if somebody moved all the state prisons into the same neighborhood.

Outside those walls, electricity is iffy. The statistics — an estimated 7.3 hours of service a day in Baghdad — give the picture. But the meaning is given depth and personality when an Iraqi greets you one morning and comments about a pleasant surprise: In his neighborhood, power was on all night.

Electricity Minister Karim Waheed didn't have that kind of luck recently. Watching a closed-circuit feed of a news conference in which he described the state of the nation's grid, Waheed's face suddenly froze on the TV screen.

Then came word from the technicians in The Associated Press' Baghdad bureau. Power had cut out at the site of the news conference. ...

So it goes, day in and day out in occupied Iraq.

Posted by janinsanfran at 10:41 PM