The peace movement and the election 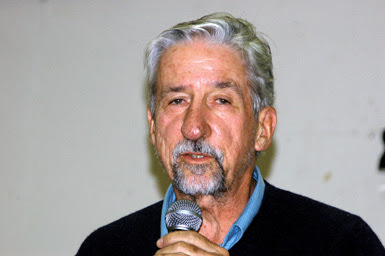 The Presidential election will be fought out over the Iraq war -- and unless we work hard and smart, the antiwar movement will have very little to do with how the debate happens and the outcome. In fact, on November 5, the peace movement could find itself confused and directionless, despite having seen its activists throw themselves into electing a Democratic President.

To try to avoid such a fate, yesterday Resolution Peace brought together activists from 40 or so antiwar groups all over northern California to try to hammer out plans to push a peace message in concert with this all-absorbing election campaign.

Longtime antiwar activist, former Assemblyman and State Senator, author, and Obama-endorser Tom Hayden gave us the big picture. What follows is my paraphrase of some of his talk, naturally focused on what struck me as important. 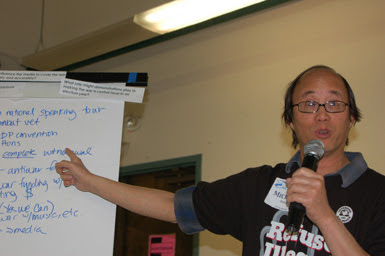 In addition to Hayden, Leslie Cagan, coordinator of the national coalition United for Peace and Justice brought further thoughts on organizing. I'll report her talk tomorrow.
Posted by janinsanfran at 4:08 PM

Thanks for this, Jan; looking forward to a report on Leslie Cagan's talk.

I was cheered to learn that UfPJ had hired Iraq war vet John Bruhns to be its legislative coordinator. He started out working with Americans Against Escalation in Iraq and quit when he realized they were about elections and not about ending the war. His experience bore out my suspicions about that crowd; the leopard does not change its spots.

Tom Hayden took a vociferous stand for the Israeli invasion of Lebanon in 1982. a war that killed 17,000 Lebanese and Palestinians and did tremendous damage to people and to the land.
i don't know his stand in 2006 when Israel attacked us.

so really really, is he considered a "peace activist"??