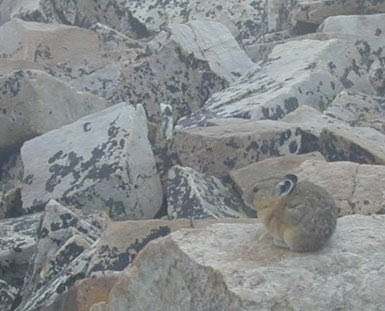 This little critter, a pika, watched us warily through a thick fog. We were stumbling along a high ridge on a Colorado mountain aptly named Quandary. Quandary is a 14er -- over 14,000 feet high -- cold, wet, inhospitable to hikers, but home to its proper inhabitants.

Pikas are about 6 to 8 inches long, rodents, grass eaters, who scarf up in the summer and hibernate under snow in the winter.

They are also proving to be "canaries in the coal mine," animals dying off because global warming is inexorably destroying the conditions on which they depend. They have lived in the U.S. west at elevations between 8,000 and 13,000 feet, but their numbers are shrinking.

Pushed by warmer weather to ever-higher elevations, the tiny pika is losing real estate at an alarming rate, according to scientists, and is disappearing rapidly from much of its historic territory in the West....

"Pikas in general are now found at such high elevations that there's not a lot of places left for them," [Donald] Grayson, [a University of Washington paleontologist] said.

Pikas are not going to go extinct in truly high places, like Quandary. But where mountain peaks top out at lower elevations, local populations of pikas are experiencing what the scientists call "blinking out." They are just gone.

Posted by janinsanfran at 9:36 AM