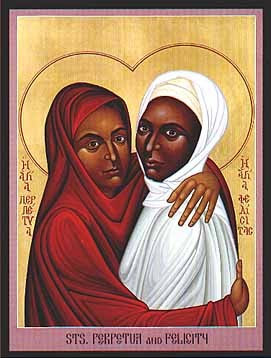 In the Christian calendar, March 7 is the feast of these lovely women, North Africans martyred in the arena at Carthage in the year 203. They apparently were real -- a written account has survived of their refusal to give up their faith on the order of an imperial magistrate and consequent public dismemberment by beasts and soldiers. In those days, you could get killed for being a Christian, instead of thinking your faith gave you a license to be critical of other people.

Perpetua was a respectable matron (of 22!); Felicity was her slave. Perhaps in that homosocial, patriarchal society, two women of very different statuses facing death could cling to each other as they are pictured on this modern icon. We are not well equipped to enter into their consciousness. Nor, I imagine, could they make anything of ours.

They seem good figures to watch over what I'll be part of today: a workshop about winning full inclusion of LGBT folks within the Episcopal Church. It should be interesting.

Perpetua and Felicity also gave their names to a variety of rosebush. We have some in the front yard.
Posted by janinsanfran at 12:01 AM

I know the rose, and had no idea of the reference of the name. I'll never think of it the same way again. Thanks for this, and best wishes for a productive workshop.