A contest for who includes the most people? 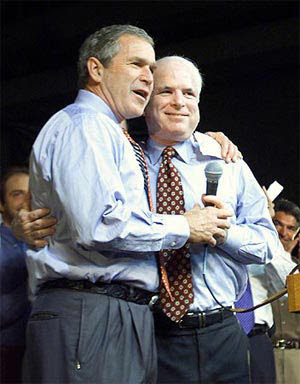 Fascinating -- we're seeing a development just like what happened with the Democratic Presidential hopefuls and the Iraq war. Certainly Hillary Clinton and most likely the rest of the early field didn't voluntarily leap out to run on an "end the war" promise. But Bush made the Iraq war the center of his Presidency. The people have wanted the U.S. out for a couple of years now. In order to be heard, to draw a contrast, all the Dems began to compete on promise to get out of Iraq, someday. Barack Obama used his early opposition to the war as his own point of contrast to the rest of the lot.

Now John McCain has chosen to tie himself to "winning the war". We can expect whoever emerges from the Democratic wrestling match to continue to campaign on some kind of promise of withdrawal, not that we can trust either of them to follow through without an energetic peace movement. But we know what they'll promote in response to McCain and that will give peace people leverage if they don't deliver.

McCain also seems to be running on his close connection to a series of Christian-rightwing nuts. First there was Pastor John Hagee, a classic ignorant Protestant hater of Roman Catholics who thinks the U.S. was assigned by God to fight the Palestinians so as to prop up Israel and bring on end times. McCain begged for his endorsement, got it, and won't repudiate the ugly bigotry he gets with it.

Senator John McCain hailed as a spiritual adviser an Ohio megachurch pastor who has called upon Christians to wage a "war" against the "false religion" of Islam with the aim of destroying it.

Will the Democrats respond to these slurs as they did to the Republicans' embrace of the war? Will we start hearing endorsements of religious pluralism, of the separation of church and state?

Will Dems speak out against Islamophobia? Obama clearly has, and probably has to, since he is getting the he-is-Black-so-he-must-be-Muslim treatment. But perhaps respect for Muslim Americans might become a theme of the Democratic campaign?

This is probably too much to hope for, but the logic of events is showing the Dems the way. Let them compete for which party is most inclusive of the great variety of religious and non-religious people who make up this country. That could be good politics. Most voters like to feel spoken to, included.

Posted by janinsanfran at 3:29 PM

Muslims Against Sharia call on Senators McCain and Obama to cut all ties with their racist, Islamophobic, and anti-Semitic supporters.