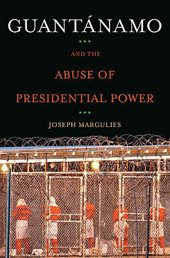 Nell has tagged me with a meme. The instructions are: Unhappily, the nearest book to my computer is Guantanamo and the Abuse of Presidential Power. It has been sitting there for several months, awaiting my finding enough energy to write something about it. It's an important, solidly documenting, distressing read. Here are the indicated sentences.

But of course, careful study of how to resist "psychological pressure" and "physical mistreatment" also produces a record of how to apply the same techniques. In one of the more controversial aspects of the Administration's post-9/11 detention policy, experienced mental health professionals, who developed their defensive expertise at SERE programs, are teaching interrogators at Camp Delta and elsewhere how to apply the very techniques U.S. soldiers have been taught to resist. At a press briefing in June 2004, General James Hill, then head of the U.S. Southern Command, said that the list of coercive techniques drafted in October 2002 and approved by Secretary Rumsfeld in December resulted from a close collaboration between experts from the Army SERE school in Fort Bragg, North Carolina, and interrogation teams at Guantanamo.

I've been trying to train myself not to write sentences that long, but I'm not a lawyer.

How quaintly this reads: in early 2006, author Joseph Margulies, one of the first attorneys trying to represent Guantanamo captives, believed he had to document the evolution of U.S. adoption of torture. Now the Administration proudly and openly boasts its right to these abominations. But I have to remember, there is resistance. Not enough resistance obviously. But not nothing either. In the face of such evil, we hang on to our humanity through our resistance.

Passing the meme: go ahead Jane, Manegee, and truth if doing one this interests you.
Posted by janinsanfran at 8:52 AM