Democrats are war weasels too 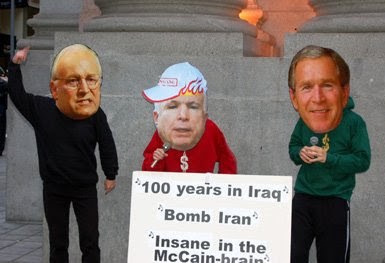 This singing and dancing trio greeted antiwar protestors in downtown San Francisco on the first day of the sixth year of the Iraq war.

Wouldn't it be great if we could be confident that our Democratic Presidential aspirants would end Cheney-McCain-Bush's occupation of Iraq? If we knew they would not bomb Iran? Too bad such any such confidence would be misplaced. Our Democrats are war weasels.

This may be a libel against an innocent animal, but somehow the little furry critter has become synonymous with "devious."

"Senator Clinton is very knowledgeable about national security and is probably going to be strong on defense," he said. "I have no doubts whatsoever that if she were president in January '09 she would not act irresponsibly and issue orders to conduct an immediate withdrawal from Iraq, regardless of the consequences, and squander the gains that have been made." [Retired General and Clinton advisor Jack] Keane added that he could not imagine any president in the White House making that kind of decision.

"He will, of course, not rely on some plan that he’s crafted as a presidential candidate or a U.S. Senator," [recently dismissed Obama foreign affairs advisor Samantha Power] said at one point in the [BBC] interview.

Clinton and Obama share the two premises of empire with the Republican administration: Neither premise is true. If Iraq proves anything, it is that the era of unlimited U.S. freedom to dominate the world is over. After five years in Iraq, this country is economically and morally bankrupt, perhaps beyond recovery. Our historic institutions that promise civil liberties within the country are in tatters. It sure was a fast slide.

***
Yesterday Barack Obama delivered what I agree with my friend Ronni Bennett was "one of the most sophisticated speeches politics has seen in years. Also one of the most personal and most decent - one that asks all of us to become our better selves. ..." But we'd be fooling ourselves if we didn't notice that he chose to embed in it one of the conventional falsehoods that underlie U.S. imperial pretensions. Speaking of Pastor Wright's views, Obama said they expressed

a view that sees the conflicts in the Middle East as rooted primarily in the actions of stalwart allies like Israel, instead of emanating from the perverse and hateful ideologies of radical Islam.

Obama is rejecting Wright for the conventional wisdom of empire, valuing the European over the Arab, the Christian over the Muslim, occupiers over indigenous peoples, autocracies over popular aspirations -- the language of war and futility in the era of multi-polar globalization.

***
Our Democratic war weasels will only be what we, the people, make them be -- just like our current rulers.

Posted by janinsanfran at 9:49 AM

What would happen to Obama if he were to take an anti-Israel stand, or criticize Israel for anything?

Yeah, a few of us made the same point at Obsidian Wings today, where the atmosphere is rather thick -- such strong desire for the man to be elected that people are ready to excuse almost anything as necessary to accomplish that. Or to pretend that he's not actually talking about Israel and Palestine in the quoted passage.

Donald Johnson started us off with an apt and succinct response to it:

OT somewhat:
Your own experience standing up to the U.S. no-fly list leads me to believe you might be interested in this Crooked Timber post about a significant, heartening ruling in defense of fundamental human rights in the EU, and related developments in Germany.