People on the move -- a constant of history 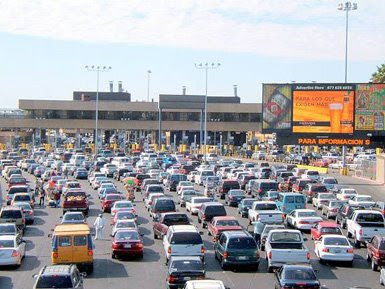 Our picture of the meaning of "immigration" is simply too small. We are choosing to lock ourselves in a tiny box bounded by anxieties about who is taking whose job, who has legal documents, who presents a security threat. Meanwhile, there's a lot we overlook from relatively small shifts with local effects to vast global migrations,

The number of people crossing into the United States at San Ysidro has fallen 21.4 percent from a peak three years ago, a precipitous drop that economists and others attribute to frustrating border waits, dwindling tourism and a struggling U.S. economy. ...

"There is nobody spending any money," said Tom Shultz, the owner of a Subway franchise near the San Ysidro port of entry. Shultz said the overwhelming majority of his customers are from Tijuana, and most are daily commuters. "I see a drop in traffic, and I see more cautiousness in spending."

"Between the border wait time and security issues, it is killing us," said Jason Wells, executive director of the Chamber of Commerce in San Ysidro...

Yes, the national obsession with guarding the U.S. border is killing small business and pissing off the Chamber of Commerce in this Republican bastion. A more open border made a healthy economy; cutting off movement is choking the border communities, on both sides.

Meanwhile, across the globe, the European Union is trying to look ahead and perceives a profound new challenge:

In its half-century history, the EU has absorbed wave upon wave of immigrants. There were the millions of political migrants fleeing Russian-imposed communism to western Europe throughout the cold war, the post-colonial and "guest worker" migrants who poured into western Europe in the boom years of the 1950s and 60s, the hundreds of thousands who escaped the Balkan wars of the 90s and the millions of economic migrants of the past decade seeking a better life.

Now, according to the EU's two senior foreign policy officials, Europe needs to brace itself for a new wave of migration with a very different cause - global warming. The ravages already being inflicted on parts of the developing world by climate change are engendering a new type of refugee, the "environmental migrant".

...the immediate and devastating effects of global warming will be felt far away from Europe, with the poor suffering disproportionately in south Asia, the Middle East, central Asia, Africa and Latin America, but that Europe will ultimately bear the consequences.

... "The core challenge is that climate change threatens to overburden states and regions which are already fragile and conflict-prone. The risks include political and security risks that directly affect European interests."

Actually, the U.S. faces the same environmental migration pressures-- and has the historical experience to weather it. Our history includes an analogous episode, the massive wave of immigration pushed by the 19th century Irish potato famine that filled our cities with hungry laborers, much to the consternation of the good Anglo-Saxon Americans who had got here previously.

No force is going to stop human migrations -- the task is to manage their consequences as fairly to both long time residents and newcomers as can be achieved. Pretending we can lock these human tides into our little boxes is literally crazy.

Posted by janinsanfran at 10:28 PM

Fine post! We think we can maintain a tiny box while smothering those iniside it. Especially those bordering the edges of the box.