Shame on CNN for this... 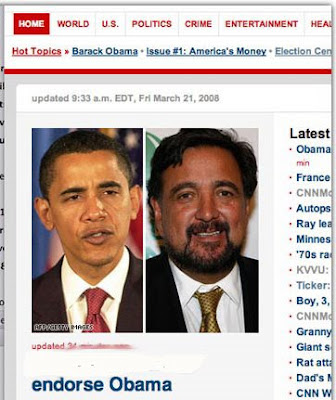 Who's that they put on their website next to Obama? Some dangerous, disheveled sheik?

No, it is New Mexico Governor Bill Richardson who today endorsed Senator Obama. That just might be the worse bit of worse bit of racial photo-editing since Time Magazine doctored a photo of OJ Simpson.

Not surprisingly, Richardson's choice of candidate does have something to do with who is more able to address racism.

As a Hispanic, I was particularly touched by his words. I have been troubled by the demonization of immigrants--specifically Hispanics-- by too many in this country...

Senator Obama has started a discussion in this country long overdue and rejects the politics of pitting race against race. He understands clearly that only by bringing people together, only by bridging our differences can we all succeed together as Americans.

When it comes down to it, people in this country who suffer from racial marginalization recognize each other and hang together -- at least that is the California experience. We may not see the potential combining of this group with progressive whites come to power this year, but that coalition is our country's future. For the moment, that future belongs to Senator Obama.

Posted by janinsanfran at 12:35 PM

That picture is mind-boggling. The man was in the race for almost a year, campaigning everywhere, in every debate -- it's not as if they have to hunt around for whatever file photo presents itself.