U.S. shows no respect
for the opinions of [hu]mankind 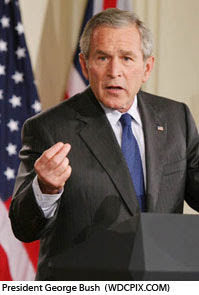 Most days, one of the news sources I read is a "terrorism" email from openDemocracy, a U.K.-based, internationalist web forum that conveys a moderate European perspective on the world's doings. This is today's lead story.

A torture technique once used in the Spanish Inquisition has been condoned by the US president. George Bush vetoed a Congressional bill outlawing water boarding and other forms of torture. Bush's latest exercise of executive power will allow the CIA to continue practicing waterboarding. Bush claims the bill would have made it more difficult for CIA operatives to obtain key information from terrorists, despite compelling evidence and advice that suggests otherwise. US General David H. Petraeus says the use of waterboarding will increase the risks of torture for future American prisoners of war. Democrats may attempt to override the veto but require a two-third majority in both the Senate and the House of Representatives to do so.

The toD [terrorism.openDemocracy] verdict: Waterboarding simulates drowning and is illegal under the Geneva Conventions. Indeed, even under US law the technique is considered a war crime. ...

Not a verdict I could argue against. My headline -- the appeal to the"decent respect to the opinions of [hu]mankind" -- was the standard the U.S. signers of the Declaration of Independence proposed to hold the English monarchy to in their famous insurgency.

Posted by janinsanfran at 2:20 PM