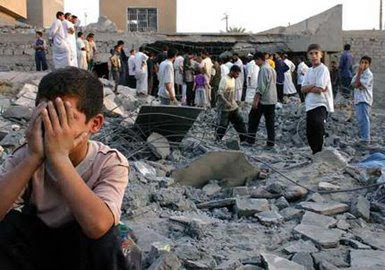 The other day, I caught a snatch of this on my car radio in that disjointed way one does while doing errands.

But I think there's really no happy ending here. If the Americans stay, then they're only postponing the inevitable, which is fulfillment of the civil war.

But the Mahdi army is growing impatient with the cease-fire. Mahdi army men are losing control, losing their power and influence. They're still being arrested by the Americans, so they're growing resentful.

There's no reconciliation. In fact, the Iraqi government just acquitted two famous death squad leaders from the Ministry of Health. I mean, they're basically an insult to the entire Sunni community.

Unthinkable -- realism on NPR about conditions under U.S. occupation in Iraq? Well if you follow the link, not really, as a Neocon policy hack was "debating" the undebatable, that this U.S. war is completely hopeless, in fact a stinking quagmire.

The speaker of realism was the reporter Nir Rosen. He was recently on the ground -- unembeded, speaking Arabic -- in Baghdad. Read his account of real life in Iraq here. There's no peace ahead for suffering Iraqis and this remains the invaders' (our) fault.

Posted by janinsanfran at 8:45 AM