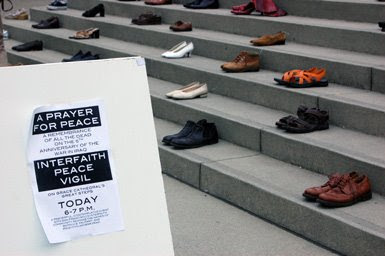 On the fifth anniversary of the Iraq war, protesters snaked through downtown San Francisco, rallied in Civic Center, and were arrested in some quantity while nonviolently blocking doors and intersections. Here's a pretty good SF Chronicle story, with lots of pictures.

A different, older perhaps, but no less determined, crowd of several hundred enacted their remembrance on the steps of Grace Cathedral at an evening interfaith vigil. Hundreds of pairs of shoes served as reminders of the thousands killed in Iraq. 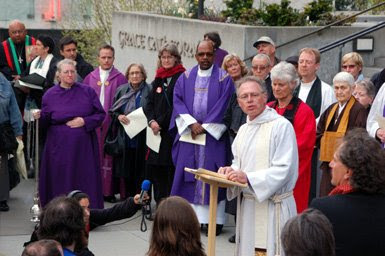 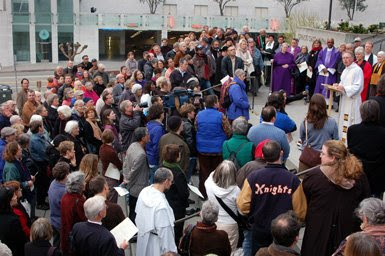 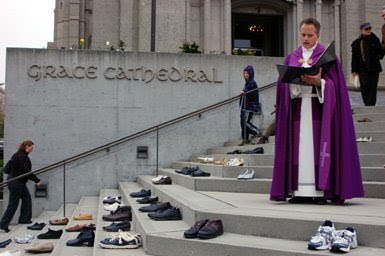 While the assembled mourners prayed and chanted, leaders read the names of some of the dead. 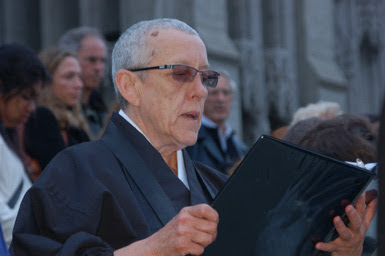 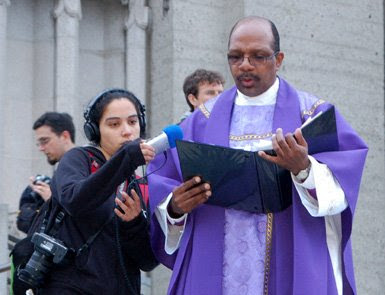 How many deaths will it take till we know that too many people have died?
Posted by janinsanfran at 10:44 PM

the view from Beirut:

It was June 1982, Dolores Church in San Francisco. A very large interfaith gathering to pray for Peace. The organizers refused to condemn the Israeli invasion of my country, Lebanon, that had happened some days before. The invasion had been supported by the Reagan administration and the weapons used were all Gifts from US taxpayers.

How big was the protest in San Francisco, if any, against the Israel war on my country in July 2006? Killings and destructions and uprootings supported by the Bush administration and paid for by US taxpayers?

The US peace movement has still a way to go before being able to teach a lesson to Obama. Unfortunately :(

It's great to have support from religious leaders. However, there is almost no crackpot, evil political stance that hasn't been endorsed by some religious leader or other.

Showing the fully regaled bishop in front of his cathredal might give the impression that American Episopalians oppose the war. Far from true.

If fact, if all American Episcopalians ceased all activity in support of the war, the war would end tomorrow.

Even the Dalai Lama, he supports India's nukes.

If we wait for religion to bring peace, we're sunk.

Dear Tina, Nice comment. You understand that in America any criticism of Israel is taboo. Here we equate anti-Zionism with anti-Semitism. It's because we are stupid.