Art is just so dangerous ... 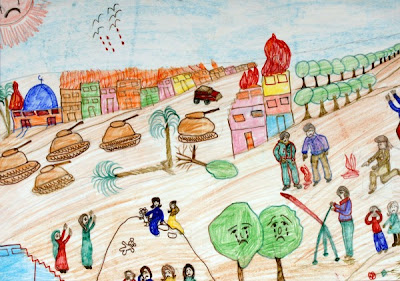 Some children are ... children. Others are just small Palestinians. I guess Palestinian children can't make worthy drawings from their lives.

An Oakland children's museum, citing pressure from the community, canceled a planned exhibit of artwork by Palestinian youth that depicted the Israeli assault during the 2008-09 Gaza conflict.

The Museum of Children's Art was scheduled to display the art from Sept. 24 to Nov. 13. The exhibit had been in the works for several months, with an opening reception to feature poetry and special art activities for children. The drawings in the exhibit were created by children ranging in age from about 9 to 11 and included bombs dropping, tanks and people getting shot. ...

"The pressure was ... well, we were getting calls from constituents that were concerned about the situation," [museum board member Randolph] Bell said. "We don't have any political stake in this thing. It just became apparent that we needed to rethink this."

...Yet it wouldn't have been the first time the museum has featured wartime art by children.

In 2007, it exhibited paintings made during World War II by American children in the Kaiser shipyard child care center. The art featured images of Hitler, burning airplanes, sinking battleships, empty houses and a sad girl next to a Star of David.

In 2004, art by Iraqi children hung on the museum's walls. The pictures, made shortly after the U.S. invasion, included a picture of a helicopter shooting into a field of flowers.

The art by the Palestinian children was similar in content.

Posted by janinsanfran at 9:07 PM

In 2004 there was no reason to be afraid of Iraqis anymore. But today, Palestinians are alive and well. The war against Arabs is also on American soil in American minds.