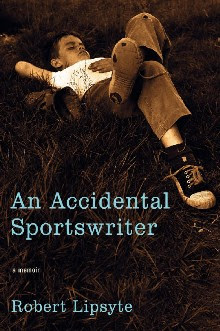 Scandal beat sports reporters might know where all the bodies are buried, but why are there so many bodies anyway?

Robert Lipsyte, a former sports columnist for the New York Times shares a lot of (unpopular) answers to that question in his memoir An Accidental Sportswriter.

Lipsyte describes himself as the fat kid bullied by the cool boys in high school -- and consequently fairly quickly able to overcome the hero worship of too much sports writing. He sees U.S. sports as fostering a distinct and often socially destructive milieu.

... I began to perceive the shape of a social infrastructure that at first I called SportsWorld, now Jock Culture, because it is based on a model of manhood in the arena and it extends into business, politics, and family life. I'm more and more convinced that Jock Culture is a defining strand in American life and has helped create many of its values -- positive ones such as hard work, bravery, and fellowship, as well as negative ones such as intimidation, domination, and cheating to win. In Jock Culture, the opponent must be beaten but ultimately respected. Contempt is reserved for those who are not of the team, not one of the righteous, focused, disciplined insiders who play or cheerlead or comfort or boost. Contempt is reserved for the Outsiders, the nerds, wimps, burnouts, band fags. The English majors.

I like to think the contradictions embedded in spectator sports culture are more obvious to women -- after all, in "jock culture" the true outsiders are "girls" -- but too many women sports writers and especially TV sideline commentators seem to have absorbed its norms. Watching football, I sometimes want to scream at these women: "Nobody cares about your latest hair do, girl!" But I supposed they do.

Lipsyte found that other sportswriters responded to his noticing how the structure worked with confusion:

... why couldn't I accept these accomplished men and women in sports as my heroes? Why did my work have to be so relentlessly political? ... Then I thought -- now I always I think -- why isn't everyone else's work more political?

I can relate to that. Fortunately, I have found friends who are sports fans who, like me, insist on looking at the politics.

Lipsyte lasted as long as he did as sportswriter in the late '60 and '70s because, for a moment, some of the athletes were political too -- determined to understand the power relations that framed their lives and take some control. He ended up collaborating on writing Dick Gregory's autobiography and manifesto unhappily titled Nigger, ran at times with Muhammed Ali's entourage, met Malcolm X, and later the group of northwestern athletes who had some vague connection to the Symbionese Liberation Army. Though close to these figures, he believes he kept his integrity as a journalist, an observing outsider.

Ultimately, I don't completely trust anyone I write about. Our interests are different: mine to find what I can consider truthful as well as readable, theirs to be presented in the best light. ... I'm a reporter, I don't trust anyone. I'm too hip to be happy.

That last statement catches how the better reporters I've known seem to move in the world. It always looks a little painful.

Lipsyte's sports writing subsequent to that brief politicized era 40 years ago was more sporadic. He dipped in and out of a setting in which he was both knowledgeable and always at arms length from the many hustlers, promoters and con men who live there.

He gradually came to articulate the gender role implications of how our spectator sports are structured:

If a woman beats you, she can't really be a woman. Probably a dyke.

...I wish I had figured out that lesbian branding scam a lot earlier, because in some ways it was the flip side of calling boys who didn't fit easily into Jock Culture "fags." Women athletes as good as or better than average male athletes were obviously as queer as were males who weren't good at all or who refused to give it up for Coach. ... I realized it was more about control than homophobia, and it did keep straight boys in line. For gay male athletes, it frequently meant giving up football and baseball for cross-country or dropping out altogether. For women athletes, many of whom were lesbians ... it meant staying in the closet and/or looking "feminine."

He came to admire Billie Jean King for not only breaking up the gender hierarchy in tennis, but also for organizing the world's best players to destroy the phony amateurism of a sport based on under-the-table payoffs.

I believe that Billie Jean was the most important sports figure of the twentieth century. Not only was she the symbolic leader of a movement representing half the world's athletes and potential athletes, she had also been a leader of the revolution that had overthrown the most oppressive concept in sports, amateurism, a dictatorship in which sports officials, well-paid executives if not wealthy aristocrats, controlled unpaid athletes.

Early on, the control came through class -- only athletes rich enough to support their training and travels could compete in tennis, golf, and Olympic sports. Later, as working-class kids like Billie Jean rose, the control came through doling out money surreptitiously. By cracking open tennis to professionals, Billie Jean helped create a climate of player power that would sweep through all sports, eventually leading to free agency in baseball. Billie Jean and Muhammad Ali were the mom and pop of the so-called Athletic Revolution of the 1960s and '70s, even though neither of them was political or intellectual in the way of the academic commandos of that movement. ...

Lipsyte is particularly interesting on why it took so long for sports reporters to admit the obvious and "out" the many athletes who are using various drugs to try to gain an edge.

I came out of the Greenie Era, when amphetamines were as common as M&M's in major-league clubhouses and probably more popular. Ballplayers popped speed to jolt themselves awake after nights on the town.

...Count me among the sportswriters who didn't go after the juicers. All that twenty,first-century media rage over 'roid rage felt like the revenge of the nerds. Sports scribes were so ashamed of having blown the only truly big story of their generation that they turned viciously on their former heroes. It was the mirror image of he story about the weapons of mass destruction in Iraq that weren't there. The front-page bigfeet blew that one. The steroids were right in front of the sports scribes, but they were in denial -- and in the tank.

This book is a true treat -- a window on sports for the politically oriented that entices the reader to sit back, relax, and watch a journalistic performer show his stuff. What's not to like?
Posted by janinsanfran at 7:16 AM

What a terrific review, Jan. Of course, you also have a wonderful subject - I've been privileged to work with Lipsyte a few times and he is the real thing.

He's a pleasure to read on any subject and I'm off to get this book.