An unambiguous yarn about World War I 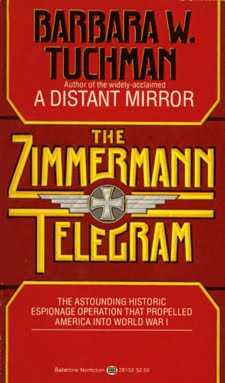 Popular historian Barbara Tuchman's 1958 effort, The Zimmermann Telegram, is the sort of thing that "serious" historians seldom write these days: it's a good yarn. In later years Tuchman established her reputation with more substantial volumes, but this early World War I tale is more like a thriller than most history.

In 1916, the British (and the French but they don't play in this tale) were on the ropes -- broke and exhausted after two years of bloody and massively mismanaged war against Germany. Their only hope was intervention from the reluctant United States led by President Woodrow Wilson who was re-elected that year with the slogan "he kept us out of war!" Their prospects look bad.

But professorial code breakers in the basement of the British Admiralty had cracked the German codes, so the British were reading German diplomatic correspondence. Learning from these cables that the Germans were intriguing with Mexico and Japan to encourage an attack on the United States through the southwest, the British finally had a smoking gun that would force Wilson to bring his country into the European war. But how to use the diplomatic communication -- the "Zimmermann telegram" of the title -- without leaking its source and revealing to the Germans that Britain was reading its mail? The solution to that problem of "protecting intelligence assets" forms the guts of Tuchman's narrative of how the U.S. finally came into the war. It is a good story (some of which has been amplified by subsequent releases from period archives.)

When you read a lot of books about the same period, as I am doing these days about World War I (see here and here), you begin to catalog their similarities and differences and to feel they are talking with each other. Though this is a slight book about a minor episode, I found myself approaching it this way.

World War I was such a clearly mad enterprise that every author touching on it vies to describe its horrors. Here's a snippet of Tuchman's scene setting about the third winter of the war:

The ghastly losses on the Somme -- sixty thousand British casualties in a single mad day, over a million Allied and enemy losses in the five month battle --had been for nothing. The Hindenburg Line was still unbreached. The whole war had been like that, regiments of lives spent like water, half a million at Verdun alone, without either side's winning a strategic advantage, but only being riveted together like two fighting elks who have locked horns. Now the French were drained, the Russians dying, Rumania, a late entry on the Allied side, already ruined and overrun.

The enemy was no better off. Germans were living on a diet of potatoes, conscripting fifteen-year-olds for the army, gumming up the cracks that were beginning to appear in the authority of Kaiserdom with ever harsher measures. ... England had fortitude left, but no money and, what was worse, no ideas. New commanders stumbled forward in the old rut, not questioning whether to assault the Western Front again, but merely where along its wall to bang their heads. No prospect of any end was visible.

Tuchman makes no bones about her belief that defeating Germany amounted to holding up the cause of civilization and that Britain's efforts to persuade the United States to jump into the fray were completely proper and justified. She portrays President Wilson as an irritatingly stubborn impediment to this country's doing the right thing:

War stifles reform and, if the United States was sucked in, all plans for the New Freedom would be thwarted. He was lured, too, by a vision of the New World, through himself, bringing to the Old the gift of peace and a league of nations to enforce peace, an old idea newly in vogue, which Wilson now embraced as his own. If he could stop the war he could save his own program and save Europe from itself. ...

... Although no two men in any one period of history were more unlike, Wilson shared one characteristic with the Kaiser -- he would not listen to opinions he did not welcome. Wilhelm was afraid of them, but Wilson considered opinions which opposed his as simply a waste of. time. Intent upon saving Europe, he ignored the mood of the Europeans.

... Wilson saw the world caught in a berserk carnage endlessly continuing unless stopped by a disinterested outsider -- himself. The question of rights and wrongs he would not look at or professed, at this time, not to see.

Reading these repeated disparaging descriptions of the man, I was reminded of a passage from Adam Hochschild's To End All Wars, a narrative of Britain's warriors and resisters:

... if the leaders of any one of the major European powers had been able to look forward in time and see the full consequences, would they still have so quickly sent their soldiers marching off to battle in 1914?

Two years later, the leader of the United States did foresee terrible consequences and he tried mightily to "keep us out of war," perhaps not always wisely but certainly fervently.

Would the course of the 20th century have been different if the United States somehow had not gone in? Our fresh troops and above all our financing made the French and British victory of 1918 possible. The U.S. came out of that war the world's essential economic power and henceforth its imperial reach penetrated not only the colonial periphery in South America and Asia, but also the European center. The long truce of 1918-1939 in Europe ended in barbarity that made the "First World War" look a far smaller catastrophe.

Contrafactual questions are always fruitless -- and remain suggestive and intriguing. This little Tuchman volume brings them to fore starkly because it avoids any pretense of neutrality about the war's essential necessity. In later works Tuchman showed much more ambivalence, but here her story is interesting precisely because it is constructed without any such questioning.
Posted by janinsanfran at 10:26 AM