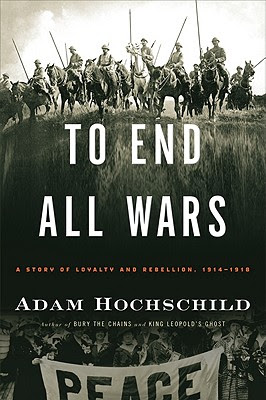 This book introduced me to the story of a person whose heroism I'd never before appreciated -- heroes are rare enough to be very prized finds indeed.

Adam Hochschild's To End All Wars: A Story of Loyalty and Rebellion, 1914-1918 recounts the swath of horror World War I cut through British culture, British families and every aspect of British life. He weaves together the stories of ordinary and extraordinary people -- grieving relatives, trade unionists, politicians, soldiers, socialists, and imperialists -- to give readers a human-scale sense of the war's enormity.

It's not easy for us to take in the sheer awfulness it all. Every World War I historian I read tries to convey the horror and they all seem daunted. Here's a sample from Hochschild's summary description:

For more than three years the armies on the Western Front were virtually locked in place, burrowed into trenches with dugouts sometimes 40 feet below ground, periodically emerging for terrible battles that gained at best a few miles of muddy, shell-blasted wasteland.

The destructiveness of those battles still seems beyond belief. In addition to the dead, on the first day of the Somme offensive another 36,000 British troops were wounded. The magnitude of slaughter in the war's entire span was beyond anything in European experience: more than 35 percent of all German men who were between the ages of 19 and 22 when the fighting broke out, for example, were killed in the next four and a half years, and many of the remainder grievously wounded. For France, the total was proportionately even higher: one half of all Frenchmen aged 20 to 32 at the war's outbreak were dead when it was over.

... British stonemasons in Belgium were still at work carving the names of their nation's missing onto memorials when the Germans invaded for the next war, more than 20 years later. Cities and towns in the armies' path were reduced to jagged rubble, forests and farms to charred ruins. "This is not war," a wounded soldier among Britain's Indian troops wrote home from Europe. "It is the ending of the world."

While this madness raged on the continent, in Britain, there remained a (very) few who resisted the war fever. At the war's outset, most people set aside any qualms. Perhaps most surprisingly, socialist trade unionists who had been proclaiming working class solidarity across borders quickly signed up for the national fight as did advocates for "votes for women" who had been throwing rocks at the Prime Minister's residence shortly before. 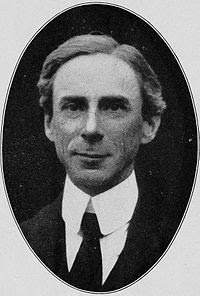 The prominent Cambridge academic philosopher and mathematician Bertrand Russell kept a perspective on the nationalist delirium.

Over the more than four years of fighting to come, he never yielded in his belief that "this war is trivial, for all its vastness. No great principle is at stake, no great human purpose is involved on either side. . . . , The English and French say they are fighting in defense of democracy, but they do not wish their words to be heard in Petrograd or Calcutta."

For his pains, he and the little band of war resisters with whom he collaborated were subjected first to ostracism, then verbal and physical attack, and finally imprisonment. Anyone who resisted the national impulse to take revenge in the days immediately after 9/11 will recognize this description of the environment they found themselves in:

... Antiwar beliefs were severely tested by the mass patriotic hysteria of the war's first months. "One by one, the people with whom one had been in the habit of agreeing politically went over to the side of the war," as Russell put it, "and as yet the exceptional people . . . had not yet found each other." How hard it was, he wrote, to resist "when the whole nation is in a state of violent collective excitement. As much effort was required to avoid sharing this excitement as would have been needed to stand out against the extreme of hunger or sexual passion, and there was the same feeling of going against instinct."

What's fascinating about Hochschild's account of the role of this eminent man was the extent to which he was willing not just to be a spokesman, but to share the work of building what seems to have been pretty efficient resistance under extremely difficult circumstances.

... the longer the war went on, the more it was militarizing Britain in Germany's image, while killing and maiming men by the millions and making certain an embittered and dangerous postwar world. He not only lent his enormous prestige to the No-Conscription Fellowship; for much of the war his thick shock of graying hair was a familiar sight at the NCF headquarters each day, for he became the group's acting chairman when its head went to prison for refusing the call-up. He attended the courts-martial of COs, visited them in prison, and devoted hours to the most mundane office tasks, writing numerous "Dear Comrade" letters to branches around the country, signed "Fraternally Yours, Bertrand Russell."

And he made clear to all that he was as willing to sacrifice his freedom for what he believed as were the younger men and women around him. When the government began prosecuting people for distributing an NCF leaflet, he immediately wrote to the Times: "Six men have been condemned to varying terms of imprisonment with hard labour for distributing this leaflet. I wish to make it known that I am the author of this leaflet, and that if anyone is to be prosecuted, I am the person primarily responsible." For this he was fined £100 (which he refused to pay, forcing the authorities to seize some of his property), dismissed from his post at Cambridge, and denied a passport for a trip to lecture at Harvard. ...

... Believing -- correctly -- that sooner or later most of its leaders would be arrested, the NCF set up a "shadow" structure... If any officer was jailed, someone else, designated in advance, would automatically take his or her job. Similarly, wrote one member, "in various secret places, buried in an orchard in Surrey, or locked in an unsuspecting city merchant's safe, or at the back of the bookshelf in the house of a remote sympathiser . . . were duplicates of every document likely to be seized." These included a daily bulletin on the numbers of men arrested, courtmartialed, and imprisoned, and file cards showing the whereabouts of every CO. Any instance of their mistreatment was recorded and turned over to one of the small band of sympathetic MPs willing to ask questions in the House of Commons. Communications were often in code: if a telegram said that a meeting was to be at Manchester, it in fact meant Newcastle. ...

I knew that it was my business to protest, however futile protest might be," wrote Russell decades later. " I felt that for the honour of human nature those who were not swept off their feet should show that they stood firm."

Of course, the war protesters couldn't stop that war -- or any of our subsequent wars. Though millions of men in the French army staged a brief mutiny and the Russian tzar was overthrown while his army melted away, the war ground on. Hochschild reflects on the resisters' all too minor part in the tapestry he weaves for us:

I wish theirs was a victorious story, but it is not. Unlike, say, witch-burning, slavery, and apartheid, which were once taken for granted and are now officially outlawed, war is still with us. Uniforms, parades, and martial music continue to cast their allure, and the appeal of high technology has been added to that; throughout the world boys and men still dream of military glory as much as they did a century ago.

Yes -- and no. There are suggestive arguments that we live in a world in which war is far less frequent, widespread and legitimate than in the past. We do momentarily see the U.S. empire becoming less willing to endure U.S. casualties and to spend unlimited treasure on world dominance than in the recent past.

Just as World War I set many terrible developments in motion at the beginning of the last century, the British resisters to the "Great War" created a template for future anti-war movements. Adam Hochschild's volume brings both these figures and their antagonists to life.
Posted by janinsanfran at 4:00 AM