Whatever it meant, this didn't make the world a better place

So the state of Georgia killed Troy Davis last night -- and for a few minutes a great many of us focused our attention on the death penalty. A cursory search tells me that 58 countries currently execute criminals while 96 have abolished capital punishment. As a death penalty-employing state, we're in the company of such nations as China, Iran, Israel, Japan, Malaysia, both Koreas, Saudi Arabia and Pakistan.
*** 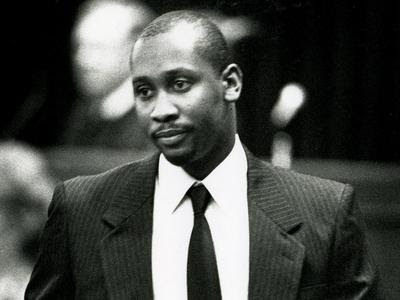 "Georgia feels it's better to kill me than admit I'm innocent."

This seems to have been an accurate summary of what we know. Davis wasn't executed because a prosecutor convinced a jury "beyond a reasonable doubt" that he had murdered someone. He was executed because, over a 20 year period, he was subjected to court proceedings that functioned like a slow-motion football replay, requiring him to show incontrovertible visual evidence that the original verdict was wrong -- only without a video tape. The decision of the original refs, no matter how biased, no matter how emotionally charged, no matter how much based on false or coerced testimony, no matter how unsupported, had to be confirmed because there was no tape.
***
Or perhaps this was simple; a police officer had been killed and someone had to die. I have to admit, I don't understand the drive for societal vengeance. I once went out to the perimeter of San Quentin prison the night of an execution and saw my fellow citizens cheer the news that a man had been killed. I don't get it.

But then, I didn't understand Bush's wars either and it was hard to see what made them attractive to many of my fellow citizens except that they answered some need to hit someone because we had been attacked on 9/11. About the death penalty as about the wars, all I can say is, "enough killing."
***
Most of us don't have to think about the state killing someone most of the time. Every once in a while a case catches our attention -- and mostly we line up wherever our preconceptions deposit us.

Andrew Cohen has reported on 100s of these cases for CBS. He knows what he thinks:

Sometimes, I believe, a murderer deserves the ultimate punishment.

But he also decided, having watched these processes, that

... it is both possible and intellectually consistent to be glad that a court has stayed the execution of a condemned man without necessarily being sympathetic to the man himself or disrespectful to his victims. It is possible to see the vindication of rights -- or at least a good-faith effort by judges to vindicate rights -- as a victory in and of itself in our nation's constant struggle for justice under the law. It is possible to separate the sins of the condemned from the subsequent sins of the justice system, and to demand more of the latter than of the former.

Sure -- people act viciously. But we must demand more than mindless, often bigoted, revenge from our legal structures. We need collective institutions that intervene to mitigate our emotional responses to crimes. The law needs to make it easier for all of us to be good rather than stoking the fires than can overwhelm our better impulses. The death penalty too often does the opposite.
Posted by janinsanfran at 9:11 AM

Email ThisBlogThis!Share to TwitterShare to FacebookShare to Pinterest
Labels: death penalty, gone but not forgotten, rule of law

The whole thing just makes me sad. Just like people cheering the fact that Perry has governed during 234 or more executions in Texas. I'll never understand capital punishment. I'll never find even a single "collateral" death in a stupid war acceptable. I don't even accept the death of soldiers defending their countries from US aggression. It all just makes me sad. The deliberate killing of someone who might have been innocent is reprehensible.

people who think that the death penalty is right should spend time in the company of the parents of the person to be executed waiting for the execution to happen. i was sent once to stay with the parents of a young man who was to be hanged. i am unable to describe how it was to be in the home of those parents waiting for the phone call that was to announce the killing/death of their son, all i can do is cry.

Lawrence O'Donnell gave a very thoughtful commentary on the death penalty following the death of Troy Davis. He mentioned something I didn't know, that Dick Gregory, longtime campaigner against the death penalty, was not in Georgia on the night Troy Davis was put to death, but rather in Texas protesting the execution of Lawrence Russell Brewer, one of the white men who brutally murdered James Byrd, an African American man, by dragging him behind a car on a bumpy road for several miles. The point being that Gregory opposes state killing in every case, and not only when the convicted person is perhaps innocent or is sympathetic. The commentary is worth a listen. Youtube link here: