"They said, we are not important workers."

Here's an offering for the day. If labor is to make a comeback, it will be led by workers like these, workers who have no choice but to struggle as if their lives depend on it, because their lives do. And they can find friends who know they are important workers because we all are.

When we imagine a union member these days, we think of a teacher, a nurse's aide, maybe an electrician. All these people would be far worse off without their unions, getting lower wages and few or no benefits, and be subject to arbitrary bosses. But these are not the kind of folks who made unionism in the United States possible. 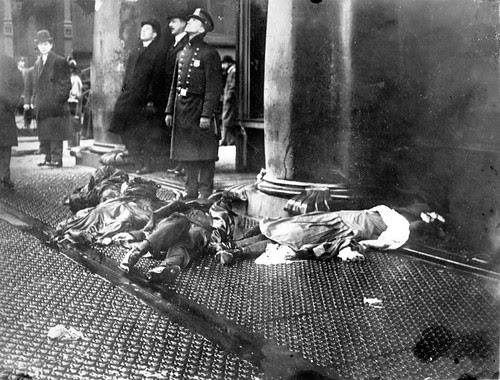 September 11, 2001 was not the first time New York City saw trapped people leap to their deaths from a burning building. Here, in 1911, police officers look up at the fire while standing beside of the bodies of young, mostly immigrant, working women who have jumped from the 8th, 9th and 10th floors of the Asch Building which housed the Triangle Shirtwaist Factory. Management had locked the stairwells and exits to prevent theft by workers.

For the very existence of labor unions, we have to thank people who worked in the late 19th and early 20th century under what we consider horrific conditions, whose bosses literally didn't care whether they lived or died -- miners, steel fabricators, women in the sewing sweat shops. For a little while in the middle of the last century, their victories and the union structure they built made possible the emergence of a middle class. Because of their struggles and the norms they established, many of us won better working conditions, better housing, educational opportunity and a chance at a secure retirement if we lived long enough. We even got weekends off from work.

As we all know, rich financial magnates and their Republican allies want to shove the middle class back to the bottom rather than pay their fair share of taxes in a decent, more equitable society. And today's labor movement is a prime subject of their attack, often seeming weak, unimaginative and even just plain timid. Under constant presure, it's all existing unions can do to try to hold on to scraps for their current members.

If labor is to make a comeback, the impetus will have to come, once again, from unexpected and neglected outsiders to society, the excluded workers.

Many of us don't notice these people unless we make an effort to look for them. Who is staffing the car wash, washing the dishes in the back of the restaurant, changing beds in the hotel, emptying garbage for that private contractor the city hired? Like the ancestors of the current middle class, they are often immigrants, "different," "foreign," and considered racially apart.

The threatened current middle class' best chance of survival requires making common cause with these folks: we need their grit, their determination, their hope for a better future. We're tired, but they are rising because they know that solidarity can evoke the good in people. That's what Labor Day is all about.

Thank you Jan for making the link with the Triangle Fire! Without immigrants joining and creating unions, none of us would have weekends,medical benefits, fair employment laws, child labor laws,retirement, sick,vacation and holidays off and overtime. Thank you to all of those who came to this country before me, who often put their lives on the line (and sometimes lost their lives) for humane and decent working conditions.