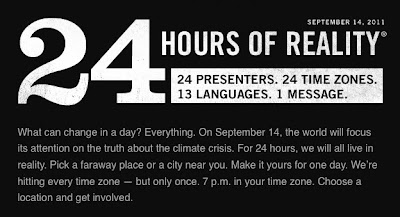 One of the features that distinguishes much climate change activism from all the other clamoring activisms around us is that it frequently seeks to be carefully and consciously internationalist. This only makes sense; the threat that human activity is on the way to frying the planet obviously doesn't respect borders. Though rich societies have contributed the most to the problem, everyone's lives are on the line.

Still, this focus on building an international movement is something a little new, an effort to spark a kind of populism that is has only weak antecedents. Various iterations of popular demands for peace, such as nuclear disarmament campaigns and the February 13, 2003 outpouring against the Iraq invasion, have mounted sporadic coordinated transnational actions. The anti-neo-liberal, anti-globalization movement is also, of necessity, multi-national. But an assumption that campaigns must be international strikes me as new -- at least since socialism proved unable to unite the workers against the nationalist war-makers in Europe in 1914.

Today the Climate Reality Project, founded and chaired by Al Gore, is trying to make entire world "focus its attention on the truth about the climate crisis." A series of web talks in various languages will go on over a a 24 hour period. You can see the whole schedule and links here. The effort claims 5 million members.

It is guided by one simple truth: The climate crisis is real and we know how to solve it.

Who knows, maybe a former U.S. vice-president can launch (or relaunch) an international sense of urgency about man made global danger and the hope for global solutions. It seems a long shot, but campaigns like this must explore all possibilities.

Since I would do almost anything before I'd watch a webinar (it's a personal prejudice), I'm just glad that promoting this has Gore back in circulation, giving interesting interviews. Here he is talking with Bradford Plummer:

BP: ... taking that opposition is a given, there’s been a lot of discussion about whether something more is needed to fight it than yet another recital of climate science facts.

AG: Right, you hear a lot of people giving advice on how to talk about climate science—how you need to dress differently or stand on your head and deliver the message in rhyme. And I respect all that, and I hope a lot of people will present the message in their own way. But my message is about presenting the reality. I have faith in the United States and our ability to make good decisions based on the facts. And I believe Mother Nature is speaking very loudly and clearly. We’ve had ten disasters in the United States this year alone costing more than $1 billion and which were climate-related. It’s only a matter of time before reality sinks in, and we need both parties involved. And the only way to get the right answer is to understand the question.

BP: What about the folks who say that environmentalists should drop the emphasis on climate change and instead just talk about the benefits of energy independence or the virtue of green jobs or whatnot?

AG: Well, I think the opportunities for tens of thousands of good new jobs and building infrastructure—that’s a powerful economic argument. Reducing our dependence on expensive dirty oil in a market dominated by the most unstable region of the world—that’s also important. But I think these arguments and others are far more effective when they are coupled with the main reason for doing this, which is to save the future of civilization. And I think when the right wing and carbon polluters intimidate people into avoiding the word climate or the subject of the climate crisis, that does not help in the long run. The core of the message still has to be about the reality we’re facing.

I don't know whether Al Gore's reality-insistent presentations can make a difference, but there is something attractive about his giving the presenting of simple information another try.
Posted by janinsanfran at 5:00 AM