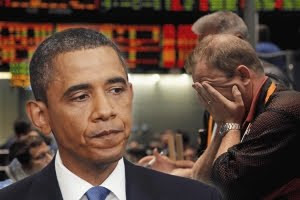 Our frustrating President is reported as remarking something the other day that says to me his political smarts are again asserting themselves.

Now he is talking sense. It seems plausible to me that winning the 2008 Presidential nod among Democratic contenders in a year when whoever got it was highly likely to triumph was indeed a stunning feat of political fancy footwork. The skinny Black guy with a thin resume and a funny name had enormous hurdles to jump to prove to Democratic voters and their "leaders" that he could be the candidate. He showed the managerial acumen to hire people who would create a plan to get him there, then largely used his time to playing the role (its a theater piece) to acting "the candidate", while being ready to step in at difficult moments. Winning in the nomination was a bravura performance and it is why he is in the job. It's good to hear he still knows that -- it would be easy in his current role to forget it.

At the same talk to donors, he apparently said something else equally telling:

The “campaign has not yet begun,” Obama told his well-heeled audience, adding he’s going to stick to his “day job” of governing for the “next several months.”

And therein is a glimpse of the man's weakness in his current role. Yes, he was dealt an atrocious hand: managing economic collapse in the midst of hegemonic decline. Nobody was going to look suave. But that offhand remark shows he considers his political necessities -- convincing, cajoling, assembling majority support, swinging his political party behind his policy prescriptions -- as something separate from doing the nation's business. (And not something he relishes it seems.)

This is a technocratic picture of government. The wise will install good policies -- the people are a noisy audience, perhaps worth managing at times, but without the capacity to know what's good for us.

This is a deeply anti-democratic (small "d") vision of our politics, one probably shared by most of our major political figures. And it doesn't work, at least it hasn't in the past. Presidents who remembered as wise and good -- I think of Lincoln, of FDR -- have been party builders, canny even if unscrupulous assemblers of majority coalitions that enabled them to get through enormously hard times. Even Lyndon Johnson deserves some credit here for knowing that his Vietnam war would destroy his party if he sought re-election. (The war's ramifications did anyway for many years.) These leaders knew that corralling the fractious masses was part of the "day job." That's what government "by the people" means in this nation's political system. The incumbent doesn't seem to get it.

UPDATE: Sounds like Obama was in full political campaign mode today in his deficit message. Good for him -- and for us for communicating by way of opinion polling that nothing else will work.

***
And yes, I will of course be voting for and pulling for the guy to get re-elected. The alternatives are even more puny figures. But we're all in for a long run of hard times.
Posted by janinsanfran at 5:00 AM