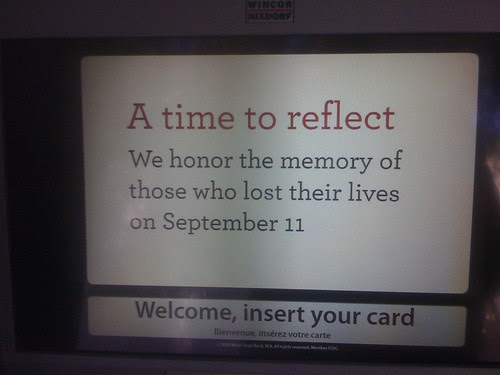 My ATM tells me it's a day to reflect. Since we've learned of late that the banks are our masters, I'll comply.

On September 11, 2001, the accepted numbers for deaths are:And then, we went to war in Afghanistan and things get a little harder to count. According to iCasualtiesNobody (except their relatives) much bothers to count dead Afghans. The U.S. and the Taliban accuse each other of causing most of the deaths. In 2009, Harvard professor Stephen Walt guessed civilian deaths numbered between 12000 and 32000. The rate of killing of civilians has only risen in the two years since.

And then, for no reason that had anything to do with the attacks of 9/11, but because unscrupulous men took advantage our impulse to seek revenge, we charged off the invade and occupy Iraq. Again according to iCasualties,There have been several international efforts to quantify Iraqi deaths subsequent to our invasion. There are vast discrepancies between the totals various researchers arrived at. Their estimates range from 150000 to about 1.5 million. The wide variation stems, in part, from whether we should count infants and elders who would have survived if the occupation hadn't led to the destruction of the Iraqi state's health, sanitation and other modern infrastructure. The invasion and occupation provided the spark for an Iraqi civil war; the lower figures disclaim responsibility for what we touched off.

There's somewhat less argument about the human displacement that followed on the invasion: more than one million Iraqis left the country and several million more became internal refugees. Very few of these people will ever be made whole. 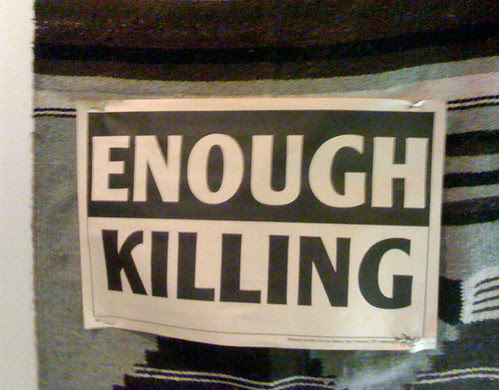 My partner and I gave away these signs to anyone who would take one in the days after 9/11. I still see one every once in awhile.
Posted by janinsanfran at 5:00 AM