When the President announced last month that immigration authorities should shift their enforcement priorities toward deportation only of people considered a security or public safety threat, it seemed a step toward a saner, more humane policy. 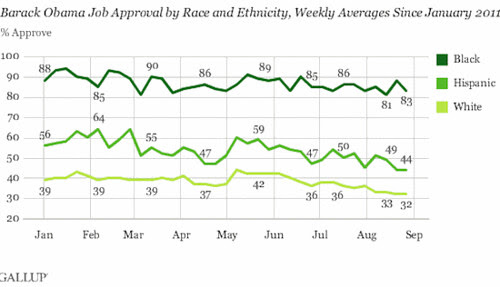 It also seemed like a good idea for the President's re-election campaign, since he was losing the trust of Latinos who see their relatives and friends arbitrarily kicked out of the country. The chart shows the gradual fall in the President's approval among Latinos. He's sitting well under 50 percent, a cumulative fall of about 15 points in the last year.

The shift in immigration enforcement policy seemed designed to shore up Obama's re-election numbers and that's fine. That's what applied pressure is supposed to get people in a democracy. The bums don't like the idea of being thrown out.

But of course there's a bureaucracy involved, not to mention thousands of immigration cops whose practices and attitudes may not be quite so malleable as those of politicians. And so, lo and behold, cruel and unnecessary deportations are still the story for too many people.

[Roxann] Lara, originally from Delicias, Chihuahua, is five months pregnant and the mother of two U.S. citizen children. She is in the country illegally because she overstayed a visa. Her attorney says she’s the “poster child” for leniency under the June directive.

Instead, Lara was detained and processed by immigration authorities in Anthony, N.M., last week after she admitted to having expired documents when local police and U.S. Border Patrol agents came to the door looking for her sister.

It means the “left hand isn’t aware of what the right hand is doing,” said Carlos Spector, Lara’s El Paso-based attorney. "I think it’s important to note that this [directive] has not reached the lowest levels of ICE ... because [Border Patrol agents] are still picking up pregnant women."

...In Lara's case, Agent Ramiro Cordero said, the Border Patrol "did exactly what we were supposed to do. If the courts grant that person some type of legal document, then the system works." ...

Markos Moulitsas, proprietor of the Daily Kos political blog, who is decidedly not a poor immigrant scratching a living anonymously, explained why a cruel immigration policy cuts so deeply among Latinos, even those who are well established and politically active citizens.

Elsewhere Moulitsas called the President's immigration shift "the good kind of political pandering." That's apt. Obama needs Latino support and he has to offer something to get it. But words without action aren't going to cut it.

The entire nation is likely to be having similar thoughts when Obama talks about the economy and jobs tonight.
Posted by janinsanfran at 7:02 AM