A tale of a horrible murder, two children, and a jury

The "facts" of the case seemed all too simple. Prosecutors and defendant's lawyers agreed on this much:

[Brian] McInerney was 14 when he walked into a morning computer lab at E.O. Green Junior High, pulled a .22-caliber handgun from his backpack, put the gun to Larry King's head and pulled the trigger twice. King was 15.

Despite the agreed facts, jurors couldn't agree on what the killing meant. Seven jurors thought this was a case of voluntary manslaughter -- a crime of impulsive passion; five that this was murder, either first-degree (premeditated; hate motivated) or second-degree (still murder, but less culpable). A mistrial, meaning the possibility of another trial, was declared.

The slain boy, Larry King, was gay and not shy about flaunting it. In fact, he sounds like many a teenage boy whose new feelings of potency make him ready to get in the face of his schoolmates. The defense brought testimony about this before the jury.

In the months before the shooting, King began wearing makeup and women's spike-heeled boots and seemed to relish making boys squirm with comments such as "I know you want me," teachers said.

Larry King wouldn't or couldn't play by the rules that gay boys are supposed to hide their feelings. This evidence was used by the defense to appeal to whatever horror might exist in the jurors at publicly expressed gay sexuality.

I have to ask, would the jurors have been as horrified if some football jock claimed his right to comment on female classmates and taunt them with how much he wanted to get in their pants? Though I can imagine as a girl wanting to do it, I don't think that sort of affront would give a girl a right to shoot the offender.

I'm a huge fan of juries. It doesn't always work this way, but I think they often bring wisdom from life experience to the circumstances they are shown -- wisdom that is invisible to the practitioners of criminal "justice." See for example this. 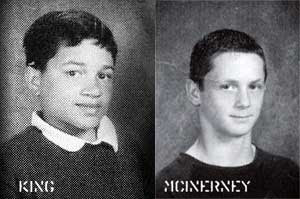 This case -- if news accounts are fairly accurate, always an "if" -- seems to have become a contest between prosecution and defense as to who was a child. The prosecution insisted that the shooter be tried as an adult; after all, if he'd been found guilty as a juvenile, he'd be free by age 25. Yet the crime had the elements of premeditation and the shooter also possessed hate literature. The defense, properly doing their job, humanized the killer as the victim himself of a violent home.

Most adults are easily distressed by how early in life kids come into their sexual feelings. We've forgotten or repressed that period when we were tossed about like flotsam by our hormones. If the members of the jury were straight -- were they? the news coverage doesn't say and we shy away from such questions -- gay hormonally-induced stupidity can seem alien, maybe diabolic, certainly threatening. For some, a Larry King can't have been a child. Children don't express those feelings.

On the other hand, children don't hide a gun in their back pack and slip past security in order to shoot a classmate in the back of the head. At least I am not ready to think that is childish behavior.It's hard for me to consider Brian McInerney a child.

The prosecutors were probably unwise to try the shooter as an adult, no matter how much some gay rights advocates, including me, would have felt that Larry King was being done an injustice by the short sentence that was all he could receive in the juvenile court. There's a reason that we used to have juvenile justice system that tried to do something besides just lock criminals up and throw away the key. Kids just aren't adults, yet.

Though I don't like the success of what amounts to a homophobic "gay panic" defense in this trial, I think I'm willing to admit that the jury did it's best with the choices they had. They needed better options. That's not the children's job -- that's our job.

Posted by janinsanfran at 2:16 PM

Having just served on a jury this summer, I better understand the difficulty of the decision they had to make. I don't know that jury but I know that you have to base your verdict on the evidence you are given and that sometimes isn't enough. It is not all you would want to know or wish was presented.

In this case, I'd want to know what evidence there was of premeditation.

I'd also wonder if the killer was gay also and hadn't been able to accept it not that it'd excuse murder.

I also would find it wrong if the school system ignored the gay boy saying what he did to other boys. I know it's a different era but if a straight boy had said to me what you are saying the victim said when I was in high school or to my granddaughter today, I'd be furious as would my parents have been. I would consider it very wrong for the school to ignore what amounts to sexual harassment and feel that the victim should have been taught to handle his sexuality better. This would be whether he was dealing with heterosexual or gay sexuality.

It's very much a tragedy. And one of the problems we have today is not treating gays the same as straights in terms of learning responsibility. When we finally reach a point of recognizing that gender is not a choice and there isn't a wrong or right for it, then teaching responsible behavior will maybe go along with it although you sure see plenty of sexual harassment today. My 13-year old granddaughter was groped last year on the playground with a boy in her class trying to pull off her pants before he got stopped. The school didn't do much about it which I think will lead that boy to further problems if more didn't happen about it than was told to my daughter when she consulted with the school over the event! We are a sexually screwed up people is all I can say.

Rain, I couldn't agree more that this all seems a tragedy. My impression is that the jury did the best they could with what they had -- and that something had gone terribly wrong well before. Both the killing and the mistrial are reproaches to how we are handling the socialization of young people.

Mostly I think adults are inadequately aware of the extent to which schools are arenas of sexual harassment between students, regardless of gender. We should be able to make it safer for kids to grow up.

Well, there is so much to be said about this case. But one that leaps out at me is "he'd be free by age 25."

I don't know a lot about the juvenile justice system, but it seems to me that, at least for murder, there ought to be a better (longer) choice than freeing a convicted killer at age 25 so that prosecutors would not feel it necessary to (necessarily) try a 14-year-old as an adult.

The other big point you make very well - that had the victim been a straight football jock there would not be all the induced panic brought forth with gay involvement.

What a terrible, sad case.