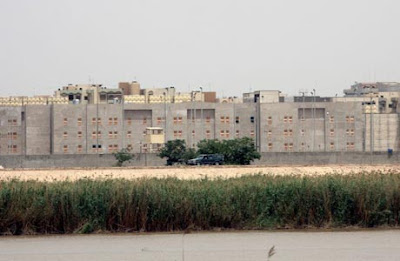 A little good news for a change.

Obama to dramatically reduce troops in Iraq
The Obama administration "has decided to drop the number of U.S. troops in Iraq at the end of the year down to 3,000, marking a major downgrade in force strength," Fox News reports.

"Senior commanders are said to be livid at the decision, which has already been signed off by Defense Secretary Leon Panetta. The generals on the ground had requested that the number of troops remaining in Iraq at the end of the year reach about 27,000."

Oh I know -- they all should be leaving. And we're probably aiming to leave tens of thousands of spooks and contractors, but somehow I think the Iraqis can deal with them. Other countries do. And we owe reparations for trashing Iraqi society that we'll never pay. But this is good news, a right path taken where the U.S. has been doing wrong for eight long years.

***
Bill Keller, former oped writer and later executive editor at the New York Times has a wordy and self-serving pseudo-apology in today's paper for his enthusiasm for the Bush Administration's excellent Iraq adventure. He still doesn't admit that there were lots of people around who, if the Times had looked beyond official sources, could have told him that there were no weapons of mass destruction and Saddam Hussein presented no threat to the United States. Maybe they were always going to brush off an individual like former weapons inspector Scott Ritter who worked diligently to try to get their attention. But Keller and Co. might have attended to the eminent Swedish diplomat Hans Blix in charge of the United Nations inspection agency. And then there were dissenters in the U.S. military like Army General Eric Shinseki. But no -- even Keller admits he and his other "liberal hawk" buddies were "a little drugged by testosterone." Too bad for Iraqis ...

***
An article by a former Republican Congressional staffer Mike Lofgren, "Goodbye to all that: reflections of a GOP operative who left the cult," is getting a lot of play around the blogosphere today. It's a scary picture of a political party so mad with power lust that it is willing to tear down our democracy while defending the super rich. One of Lofgren's core observations is getting a lot less play than other parts, but it is totally relevant to the aggressive war on Iraq. He is very aware of how war profiteering drives a lot of Washington's military obsessions. But he wants us to understand that there's more:

They worship at the altar of Mars. ...

Take away the cash nexus and there still remains a psychological predisposition toward war and militarism on the part of the GOP. This undoubtedly arises from a neurotic need to demonstrate toughness and dovetails perfectly with the belligerent tough-guy pose one constantly hears on right-wing talk radio. Militarism springs from the same psychological deficit that requires an endless series of enemies, both foreign and domestic.

The results of the last decade of unbridled militarism and the Democrats' cowardly refusal to reverse it, have been disastrous both strategically and fiscally. It has made the United States less prosperous, less secure and less free. Unfortunately, the militarism and the promiscuous intervention it gives rise to are only likely to abate when the Treasury is exhausted, just as it happened to the Dutch Republic and the British Empire.

The future he foresees here -- a broken United States financially and spiritually -- may look better for much of the world than what we've lately lived. But the citizens of this country have to understand that it won't be a smooth ride on the way to bankruptcy. How low we go and how badly our rulers will behave will be determined to some extent by the strength of whatever political movements can be built for democracy, against militarism, and for international equity. Yes, we still need a peace movement, even when it seems as if no one is listening.
Posted by janinsanfran at 3:55 PM