Why are we still in Afghanistan? 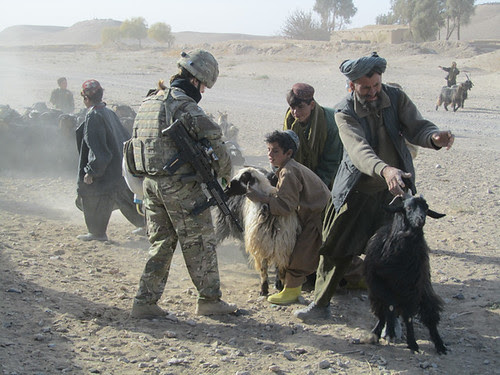 What if we went to war and in the country where the shooting was happening people had no idea why we had invaded? The United States' ten year long incursion and sporadic attempt to remake Afghanistan has achieved that end, if not much else.

Nearly half of all Afghans are under the age of 15, too young to have a firsthand recollection of [the 9/11 attacks], or the U.S.-led invasion that began less than a month later. Among older people, even those grateful that the invasion ended Taliban rule, there is a sense that the conflict has moved far beyond its original impetus.

The war is widely regarded now as being driven by many other factors, including foreign self-interest and internal power struggles. ...

"At the beginning of the U.S. invasion, we hoped for security and stability," said Abdul Raziq, a 53-year-old real estate agent living in Kabul, the capital. "But 9/11 brought calamity and misfortune to Afghanistan."

... A survey last year by a think tank, the International Council on Security and Development, found that fewer than one in 10 respondents in the key southern provinces of Helmand and Kandahar [where the strongest contingent of U.S. troops are killing and dying] were aware that the West's war with the Taliban was triggered by the events of Sept. 11.

Since they don't know why we are there now, Afghans are unlikely to take up any notions we might want them to assimilate when we leave.

And we will leave sooner or later -- the Afghan war is both unaffordable and unwinnable. To continue a purposeless war is also immoral.

Photo by way of ISAF Media. Taken in Helmand province, December, 2010.
Posted by janinsanfran at 9:48 AM