Two hundred years ago, on December 30, 1813, British soldiers and their native allies sacked the frontier settlement at Buffalo, New York, taking revenge for the burning by Americans of the Canadian town of Newark earlier that year. These events were part of what people in the United States call the War of 1812.

I don't know if the British even have a name for this little war. U.S. President James Madison led a divided nation into the fight; war proponents' motives were mixed. Though the Brits had conceded independence to their colonies 20 years previously, they acted entitled to interfere in U.S. seagoing commerce as part of their continent-wide struggle with Napoleonic France. Meanwhile, western settlers thought maybe British pre-occupation with Europe gave them a chance to seize Canada. The U.S. was economically and organizationally ill-prepared to fight the world's pre-eminent empire. Only British inattention limited U.S. losses to a few frontier skirmishes like the burning of Buffalo, the humiliating sack of the scarcely-built U.S. capital at Washington, and adoption of a grandiose, unsingable national anthem. 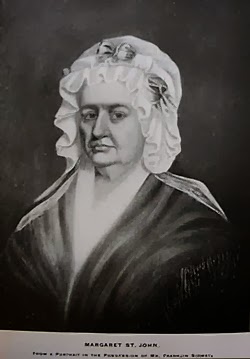 The burning of Buffalo was however important to launching my ancestors on course to becoming prosperous citizens of what later became an important trading settlement and eventually a major industrial city in the 19th century. The St. John family -- Gamaliel, Margaret and their 11 children -- had moved to the head of Lake Erie in 1807 and to Buffalo in 1810. From a Mrs. Chapman who had bought it from the Holland Land Company, the family purchased a lot for $4200 (serious money for the time!) and

… the frame for a house, forty feet square, standing on blocks, and back of which was an appendix of twenty feet square, one and a half stories high, enclosed and floored, having a chimney with the old-fashioned fireplace, and baking oven by the side of the fireplace.

… The lumber for the covering and finishing of the house purchased of Mrs. Chapman was all drawn from Williamsville; the logs for which had been cut and drawn to the saw-mill during the winter previous (the winter of 1809-10), The shingles for the house were all made during the same winter by my father and his boys, Elijah and Cyrus. ...

The cellar was made of the dimensions of the whole house, and the stones with which the walls were laid up were drawn from the quarries of Judge Erastus Granger on the banks of the Three-mile Creek, east of the then village of Buffalo.

At first the frontier war provided an opportunity for entrepreneurship. But in June 1813, Gamaliel and his son Elijah drowned while seeking to deliver supplies to U.S. forces that had invaded Canada. So when it became apparent that the British and Indians were coming to sack Buffalo, Margaret St. John was a widow with 8 children. Most residents including most of the St. John children fled, but Mrs. St. John and a daughter and, across the road, a woman named Sarah Lovejoy, remained behind. Family accounts report that Mrs. Lovejoy tried to defend her property. The St. Johns saw Sarah Lovejoy struck down by an Indian with a hatchet.

Mrs. St. John appealed to a British officer to save her, a widow with many children, from the same fate and for whatever reason, her house remained the only one standing in the settlement after the sack. In the following days, as the settlers filtered back into the scene of desolation, Mrs. St. John was able to offer them shelter, setting up something like a boarding house. She and her children prospered. The young generation married successfully. When in 1825 the Erie Canal brought frontier Buffalo closer to the nation's centers of commerce, St. Johns became pillars of the community. Margaret St. John died at age 69 in 1847. She was my great, great, great grandmother, a relationship I find hard to imagine. There must be quite a few descendants.

On the occasion of this 200th anniversary, Patrick B. Kavanagh has been trying to inform contemporary western New Yorkers about the bloody history of the area.

When war passes over a landscape, it often leaves unmistakable traces behind. From Gettysburg to the Somme, places that once were battlefields can seem to hold the memories of the dead in the very soil underfoot, the wind in the trees.

What would he like people to realize, or to understand, about these figures?

"Just what happened here," Kavanagh said. "The people. This 30 miles. From Buffalo to Fort Niagara, on both sides -- these people lost everything."

"Like Mrs. Margaret St. John," he continued. "When the war starts, she's a wife and a mother of 11 children. By the time Buffalo is burned, in December, she's a widow with 8 children. She lost children and her husband."

When the United States blithely invades and bombs other people's countries, we show we've forgotten what war on our own turf means, I think.
***

A CNN/ORC International poll found that only 17 percent of Americans support the war in Afghanistan, down considerably from the 52 percent who backed the conflict in December of 2008. A staggering 82 percent of the country opposes the war, according to the poll.

Another forgotten war grinds on. I doubt if there are many Afghans who want the killing to continue.
Posted by janinsanfran at 9:39 AM

This is a fascinating family history and provides some perspective on war and its consequences.
Three of my grandparents came from that area. My paternal grandfather's family were early Irish immigrants who came over to work on the Eire Canal. My maternal grandmother's family came up from Mexico as soldiers who traveled with Father Serra.

Where is the "antiwar" Left when Obama is the protagonist? If the US leaves Afghan it will be due to Karzai's defiance, if resolute & honest, about not allowing US troops the privilege of immunity from Afghan prosecution.
Similarly, how many prog-libs are aware or even care that Obama pressured Iraq president Maliki to allow US troops to stay there beyond Bush agreements, and also avoid possible prosecution under immunity stature?
Then there was Putin rescuing Obama from Syria.