A sign that Obamacare will get off the ground? 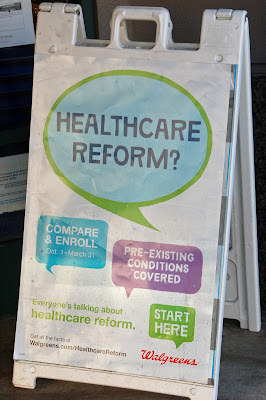 Wandering around San Francisco, these placards are common. Has this big convenience and drug corporation become a propaganda outlet for the Department of Health and Human Services?

Well -- sort of. According to MarketWatch, Walgreens has signed up with a private partner to help potential pharmacy customers navigate how to buy insurance under the new system.

Walgreens store personnel are directing individual customers who inquire to the GoHealth Marketplace, a resource where they can shop and compare health insurance plans, enroll and find other important tools and information. Consumers can access the GoHealth Marketplace online from www.walgreens.com/healthcarereform or via phone at 855-487-6969. Walgreens also is providing informational brochures and other materials in stores.

… Customers receive one-on-one support from licensed GoHealth advisors who can help guide them through the selection and enrollment process (over the phone or online). As an approved Web-Based Entity, the GoHealth Marketplace offers all plans available on the federal and state marketplaces - and can assist individuals regardless of income level or subsidy eligibility.

Judging by the folks I see in Walgreens, these stores, at least in urban areas, attract a population that could use more access to health insurance and who might need some help navigating the thicket. I see no sign that the Go-Health website has a Spanish section however. Past of the reason Walgreens is trusted in my neighborhood is that the managers are two older Spanish-speaking women, like much of the clientele.

Of course Walgreens' enthusiasm for the ACA is not altruism. They are counting on millions more paying customers with insurance. Apparently drug/convenience store chains are in a battle for market share. Ever wondered why in cities so frequently you can see a Walgreens on one corner, a Rite-Aid across the street and CVS down the block? (Downtown Oakland comes to mind.) Martin Hiltzik explains:

Those three national pharmacy chains have been jostling with one another over prime locations for years. Recently the competition has stepped up.

… The chains are aiming to become your one-stop shop for all your prescriptions. In California and most other states they already can vaccinate you against common diseases like flu. They're adding other services of the type that physicians traditionally claim as their monopoly, such as managing diabetes and other chronic diseases.

Most dramatically, Walgreens announced in January that it had formed Accountable Care Organizations in partnership with three big medical groups in New Jersey, Texas and Florida. These organizations, which are encouraged under Obamacare, replace Medicare's traditional fee-for-service model with pay-for-performance: When they deliver better patient results at less cost, they get to keep some of the savings. Who opposes this trend? That's right, your local medical association.

According to Hiltzik, the pharmacy in these stores occupies 10 percent of the floor space but brings in 50 percent of the profits, so it is worthwhile to these chains to expand their specialized medical interventions and try to compete on service levels. There's roiling activity in the chain pharmacy business.

Hiltzik's article is fascinating. He offers a rule of thumb about the proliferation of chain drugstores:

… in any given middle-income ZIP Code there are three chain drugstores for every two Starbucks.

I guess my zip code is still not middle class -- we're short on Starbucks I think, though we're rich in drugstores. But that's true only if I don't count the independent coffee joints as Starbucks precursors.
***
Interestingly, Walgreens has moved its own 120,000 insured employees into health insurance provided through a private insurance "exchange" that apes the state exchanges offered to the newly insured under Obamacare. This is not required by the new law. Employees can now among choose plans labeled "bronze," "silver," and "platinum" with differing coverage, costs and deductibles (apart from the employer contribution) as they might in the new program. If this becomes the trend among big companies, the insurance market will begin to look more familiar to ordinary insured people which may help with getting through the maze.

On the other hand, insurance didn't become a maze for no reason. It profits insurers to keep us a little confused and dependent. There are big changes afoot.
Posted by janinsanfran at 7:53 AM

There is an anti-Walgreens push here, and I think they will be forced out. They are newcomers, and the location is not very good. We have an oversupply of pharmacies. And Wal-Mart is a huge share of the market.
Since I belong to Kaiser, I just use their pharmacy and get my shots there. It is really nice to be in managed care already at this point.