Our elected officials are beginning to listen up. 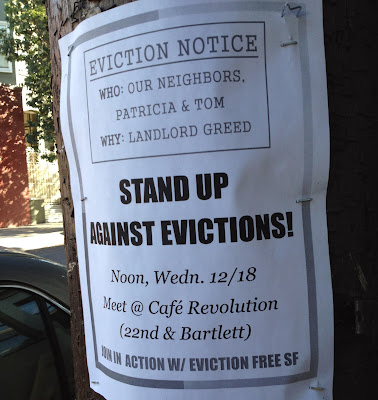 They have to listen. In the neighborhoods, what's happening is all too obvious. So people come out on the streets with bullhorns.
The national "paper of record" has taken note of the consequences of the tech boom:

More and more longtime residents are being forced out as landlords and speculators race to capitalize on the money stream.

This week local lawmakers chipped away at edges of the crisis brought by our economic tsunami.

At Tuesday's Board of Supervisors meeting, two measures drawn up by Supervisor John Avalos aimed at increasing and preserving the city's stock of rental apartments passed unanimously on initial vote. One measure eases up zoning planning-code restrictions that have kept approximately 52,000 existing units in legal limbo, many of them unoccupied. The second measure makes it illegal for property owners to merge or demolish any rental units for ten years following an eviction.

A separate measure introduced by Supervisor David Campos also passed which will give top priority to Ellis Act-evicted tenants in placement in publicly funded housing.
sfist, 12/12/13

There may be some pulling and hauling, but these tweaks to the housing laws will be enacted. Avalos and Campos have been on the case for the poor and middle class all along; our more money-oriented pols have noticed that they better listen to the surging angry chorus.
As Campos said the other day

This is about the soul of the city …

Does San Francisco still have a soul?
Posted by janinsanfran at 6:30 AM