Her "day in court" (she's barred) is Kafkaesque 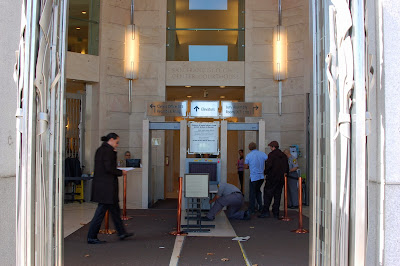 Lately I've been writing rather cavalierly about the abusive treatment our post 9/11 Heimat Security regime inflicts on people in the process of trying to fly.

But thanks to Nell writing in the comments, I'm now following more closely Dr. Rahinah Ibrahim's ongoing challenge to her no-fly list status through the excellent series of accounts at Papers Please! (Should you follow this link and find that Dr. Ibrahim's story is no longer the lead item, just enter "Ibrahim" in the search box in the right column.)

Ibrahim is not some no-count, anonymous foreign Muslim. According to the Associated Press' trial coverage, she's

... 48, lives in Malaysia with her husband and four children and is dean of the architecture and engineering school at the University of Malaysia.

The current trial is beyond Kafkaeque. Ibrahim can only testify on videotape. The U.S. government barred Ibrahim's U.S. citizen daughter from flying in from Malaysia to testify by putting the daughter on a no-fly list. This intervention was revealed by the Malaysian airline, then the U.S. spooks implausibly denied their actions. More here. Lawyers for Ibrahim were subjected to a clearance process under an order from the trial judge and thus allowed to learn what the government says is Ibrahim's watch list status -- but they are barred from telling their client.

The theory about what caused Ibrahim to be barred from flying that is presented in her legal briefs is that 1) linguistically-challenged Feds confused the similar names of a Malaysian academic association with an Islamic terrorist outfit and 2) the FBI wanted to recruit her to spy on Muslim mosques while she was grad student in California, but she stiffed them, so they stuck her on a barring list and still refuse to admit they screwed up.

"Once you're in the system it's almost impossible to get out," Ibrahim's lawyer Elizabeth Pipkin told the judge Monday during opening statements at the trial. Pipkin said Ibrahim landed on the no-fly list through inadequate training of list administrators and their bias regarding religious and national origin.

I find that totally plausible. We always refused to speculate on why the government once apparently briefly listed a couple of San Francisco peace activists. But it always seemed likely that our awkward detention was the product of a "round up the usual suspects" impulse after 9/11. Having made the initial mistake, the government was willing to devote huge resources to avoiding any kind of scrutiny, as much to avoid embarrassing itself as to maintain any legitimate "state secrets."

The judge in Dr. Ibrahim's case seems frustrated and appalled by the government's evasions of ordinary legal procedures. (Our judge, Charles Breyer, the brother of the Supreme Court judge, acted equally critical of the Feds. Experienced federal court judges don't like to be handed lies and gobbledegook.) Let's hope he forces this story into the open. He'll take a lot of shit if he does, but under our current surveillance state regime, only occasional courage on the part of fortuitously placed individuals seems to impede the rush to pervasive tyranny.

Meanwhile, testimony in this trial taught me that I better get hold of a copy of Jeffrey Kahn's book,Mrs. Shipley's Ghost: The Right to Travel and Terrorist Watchlists, to keep up on these issues. More to come.
Posted by janinsanfran at 8:54 AM