The war inside the Democratic Party 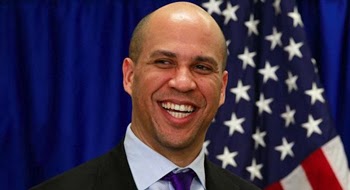 I think most Warren supporters understand that the goal of “economic populism” isn’t getting an economic populist into the White House, but rather to change the way economic arguments are conducted in Washington and by Democratic politicians. The point is to make sure Cory Bookers don’t happen anymore.

There’s no good reason that reliably liberal states should be electing senators as friendly to Wall Street as [newly elected New Jersey Senator] Cory Booker. But if you can’t stop a Cory Booker, the next best thing is to force him to change his positions to avoid pissing off the base. And there’s already some evidence that that’s worked on Booker: He quickly reversed his stance on Social Security after pressure from the economic populists.

The goal isn’t, and shouldn’t be, to block Hillary Clinton. The goal is to make sure a potential President Clinton is beholden to a better Congress and a better Democratic Party.

Exactly. And something crucial to remember as we stumble into the next election cycle and the next … we need to elect more and better Democrats who fear the people. If they don't start that way, we have to make them feel the fear. It is that simple.

And this doesn't start with high-profile national elected officials like Presidents and Senators. If we want better Dems, we have to work to put them in the local offices, state legislatures and the House of Representatives.
Posted by janinsanfran at 7:42 AM

To me a big problem for Democrats as well as Republicans is that the parties are not united in one set of goals. I offend a left winger as often as a right winger. I lean left but am in the middle; and so I won't support an extreme liberal who would do a lot of things with which I disagree.

In some ways, I think it's easier for both extremes, in each party as they do have someone they can want. People like me are their problem and they are ours.

I had to swallow some of my own reaction when we got notified our Medicare premiums will double next year and it's ACA doing it. They have a formula where premiums are based on income. We had the bad luck to draw a lot of money out in 2012 to fund a lake cabin for our kids. It's a loan which they are paying back with a professional contract and all, but it showed up as income and gave us quite a surprise when we got the notification. We can appeal it based on the year's before income and this one, but may not help. That's when the rubber hits the road with health care-- when you end up paying more and it's part of evening out the system for everybody. It's easy to talk big when it costs us nothing;). I still believe though in universal coverage, would like medicare for all but a lot of us would be paying a lot more for it if it happens-- as somebody has to pay.

Totally agree that "somebody has to pay" but I'm not willing to allow that we have to pay so much. There are too damn many profiteers -- specialist docs, medical device makers, hospital administrators, etc. -- living high on the hog while too many folks can't afford care at all. Insofar as Obamacare chips away at that, it's very positive, but I'm sure we have a long way to go.

Well, my insurance went down $40.00 a month, and so did my husband's. We are on Medicare and Kaiser, ie, managed care, so the transition has been quite easy for us.
Kaiser has computerized everything. Several people, including a cardiologist, track my heart condition and contact me regularly. I can go to my personal account on the web and get lab results and order my meds. Kaiser is ahead of the curve. It is not glamorous, just adequate. I get a little handholding--enough, since I'm not very needy-- but understand that I'm not the only patient Kaiser cares for. They were great in helping us care for my mother in law, all we could ask and more.
Wow. This sounds like an ad. Sure there are drawbacks, but we are getting the medical care we need without going to the poorhouse.

our supplemental stayed the same but what nicked us was drawing out money to buy that lake house for the kids. If we'd had more time we could have put it into a self-managed IRA that was an investment IRA and the investment would have then not counted as income as it did due to needing to move fast to not lose the property. We will try to appeal it but otherwise we will be paying double for Medicare for 2014. It's now all income based for what you pay and that is taken from your SS directly. The bummer is it being only figured on 2012 for us. In some ways I see it as fair if people routinely have that kind of income. We just don't routinely. They say a lot of seniors who work or have income of various sorts will get caught this time. We only found out about it this week with a letter from SS.

Rain: hope your appeal works. In some tax situations they let you spread what is designated by the govt. as "windfall income" over several years ... maybe this should work similarly. We're all stuck in a political cul-de-sac where the Republicans won't work with the Dems to fix unintended anomalies in Obamacare.

Hattie: we too have Kaiser. I also find myself inadvertently writing ads for the system. You hit it exactly -- Kaiser doesn't coddle you, but they have systematized basic competence. And we're so grateful for that accomplishment that we enthuse over it.

Well I'd rather have us doing something about health care than not; so it's just how goes if they won't let us income average. In the end medicare for all will likely go to something like this with basic coverage/premiums for lowest income workers and going up as people have more money; then adding to it with supplemental premiums for more full coverage. We had to start somewhere. They likely didn't want to tell people ahead of time to avoid them being irked but as it is you get two weeks notice before it doubles.