Warming Wednesdays: why the politics of climate are so tough 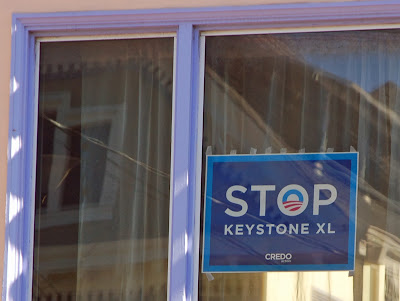 Studying U.S. history, I found it impossible to understand how the exuberant, creative young nation of the 1820s-50s, a country so proud of its own novelty and freedom, could have been so shackled to the slave system on its Southern plantations. Then I got it: slaves -- African-origin human beings -- were the wealth equivalent for their owners of the value of the contemporary U.S. stock market. Abolitionists (and the slaves) wanted to strip the rich of their patrimony, all of it. No wonder it was a decades long process before the crisis that enabled the other states to destroy the "peculiar institution."

We're living another such crisis. Serious efforts to reduce carbon emissions mean not developing and not burning the oil, gas and coal deposits that energy companies already count as their wealth. Here's Bill McKibben:

Yes, this coal and gas and oil is still technically in the soil. But it's already economically aboveground – it's figured into share prices, companies are borrowing money against it, nations are basing their budgets on the presumed returns from their patrimony. It explains why the big fossil-fuel companies have fought so hard to prevent the regulation of carbon dioxide – those reserves are their primary asset, the holding that gives their companies their value. It's why they've worked so hard these past years to figure out how to unlock the oil in Canada's tar sands, or how to drill miles beneath the sea, or how to frack the Appalachians.

If you told Exxon or Lukoil that, in order to avoid wrecking the climate, they couldn't pump out their reserves, the value of their companies would plummet. John Fullerton, a former managing director at JP Morgan who now runs the Capital Institute, calculates that at today's market value, [the known] 2,795 gigatons of [potential] carbon emissions are worth about $27 trillion. Which is to say, if you paid attention to the scientists and kept 80 percent of it underground, you'd be writing off $20 trillion in assets. The numbers aren't exact, of course, but that carbon bubble makes the housing bubble look small by comparison. It won't necessarily burst – we might well burn all that carbon, in which case investors will do fine. But if we do, the planet will crater. You can have a healthy fossil-fuel balance sheet, or a relatively healthy planet – but now that we know the numbers, it looks like you can't have both.

Trying to stop the Keystone pipeline is one element in a fight that means changing the nature of wealth in our society. We're trying to strip some of the richest people around of the only thing they seem to value.

No wonder the Koch brothers and their slightly less visible friends will fight us to planetary death to hang on to their assets.
Posted by janinsanfran at 5:00 AM

Perfect analogy, though extremely grotesque, between owning human slaves and owning the right to burn carbon molecules until humanity is exterminated.