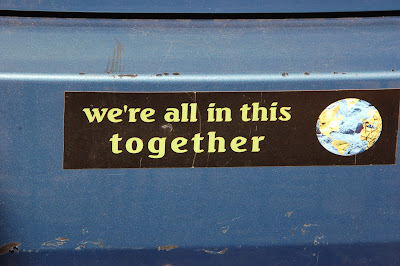 Back in the very early 90s, my partner came home from work one day and announced: "I'm now a licensed pollution trader!" We roared with laughter at what we took to be her latest bizarre assignment for the environmentally oriented foundation where she was the controller. One of the more imaginative (or possibly wacko) donors had had the brain storm that he could buy up the new permits the government was handing out under a treaty that aimed to reduce global production of the chlorofluorocarbons (CFCs) that were making a hole in the atmosphere. He would donate the permits to the foundation. The foundation would take them off the market forever, helping to prevent additions to the ozone problem.

I didn't follow how that particular scheme worked out, but I did eventually learn that the treaty, known as Montreal Protocol which set up what I now recognized as a cap-and-trade system, had apparently prevented CFC-caused ozone depletion.

It incorporates pragmatic, business-friendly principles that have allowed it to operate smoothly for more than two decades, achieving its goals — and then some — with little controversy.

But current research says the treaty has done more than save the ozone layer. Those CFCs we are not using in air conditioners and refrigerators are potent greenhouse gases. According to the Grist story on the research:

Without the Protocol, environmental economist Francisco Estrada of the Universidad Nacional Autónoma de México reports, global temperatures today would be about a 10th of a degree Celsius higher than they are. That’s roughly an eighth of the total warming documented since 1880.

That's right. We'd already be significantly warmer without these relatively non-controversial emissions restrictions. And now most countries are looking at extending Montreal to limit other warming agents.

Compounds called hydrofluorocarbons (HFCs) replaced CFCs in many uses -- and it seems these too are potent greenhouse gases. Along with much of Europe, the US has been one of the good guys seeking to add these compounds to the Montreal framework. China came onboard with the effort last summer. Now only India remains reluctant among major producers.

Replacing HFCs to reduce global warming looks both effective and politically possible. Our species seems better at chipping away around the edges of a problem than taking it head on -- for our posterity's sake, let's keep chipping!
Posted by janinsanfran at 5:00 AM