Tar sands on the way to the Bay? 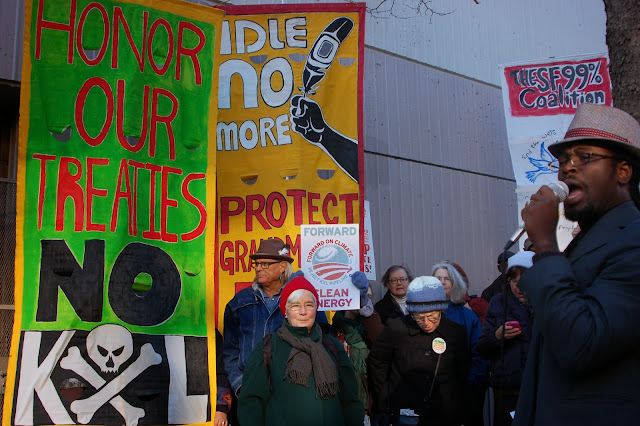 What happens if President Obama listens to activists and turns down Canadian and international oil companies that want to build the Keystone (tar sands) pipeline across the United States to the Gulf Coast? The oil companies have a Plan B: they want to ship their valuable toxic sludge by rail and barge to the West Coast of the United States for refining and/or transshipment to China.

Climate activists showed up in San Francisco this morning at a hearing of the Bay Area Air Quality Management District seeking to get the local board on record against any such plan. They insist: If the oil campaniles get their way on this, the most effected Bay Area community would be Richmond, again. Long the home of a Chevron oil refinery that periodically spews poisons on its surroundings, Richmond is a diverse low-income community where polluters have long acted as if they could get away with murder. Too often they have. Community groups have fought to reduce toxic pollution in Richmond and their organizations were out in force this morning, among them the Asian Pacific Environmental Network, Idle No More, Communities for a Better Environment, as well as San Francisco's 99 Percent Coalition.
Posted by janinsanfran at 1:34 PM

I was already feeling depressed today :( I don't know what we can do either as the need for oil is part of our mobile society where we each feel our use of it is justified but how much are we using by our individual choices-- because we can?

Environmentally, we seem on a path headed for destruction and in some ways we all have a part in it. We sure don't want to go back to the times of walking everywhere, eating only what we grow in our own backyard. We like what the modern technology has given us, the ability to drive where we wish, fly around the world, shop where we have choices from thousands of miles away.

Some could be helped if they developed the alternate technologies, which they are doing but this tar sands and natural gas is just so lucrative. I wish I could say something good here but just feel a sigh coming on :(. We might be guilty of a lot of it by our lifestyles, but nature isn't and it's taking the big hit. I think I need a glass of wine. It must be 5 o'clock somewhere...

Sure understand the need for a glass of wine, but I persist in being more hopeful. I don't want to evolve backward either, but if we don't take action, we will -- involuntarily.

Humans are big-brained, adaptable creatures -- that has enabled us to make the current mess of the climate. But the same characteristics can enable us to reduce and mitigate our impacts if we are capable of deciding to do so. Aside from needing to become more imaginative (and we can do that), what stands in our way are the short term profits of the one percent. Well the hell with them!

I don't disagree but it takes convincing a LOT of people as right now dollars are the god of this country. Nobody seems to figure out that you can't eat dollars or breathe or drink them. I saw a thing the other day about homes the wealthiest can buy with shelters underneath preparing them to live years in case of a catastrophe. It's nuts is what it is. Obama talked about dealing with income inequality. Hope he meant it.