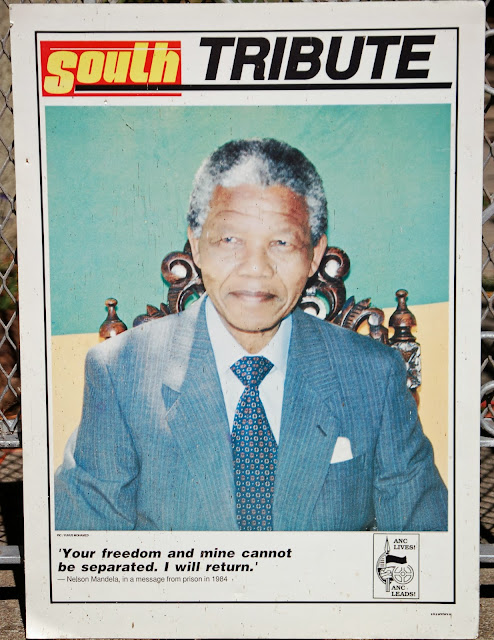 The Cape Town tabloid newspaper South (tagline: "you have the right to know") issued this poster in February 1990 when Mandela walked free after 27 years locked in prison for resisting apartheid.
The quotation -- "your freedom and mine cannot be separated" -- was part of his message from prison to South Africans in response to offers, made under tremendous international pressure by the white government, to free him if he promised to remove himself from the struggle. He remained jailed until finally he was released without conditions and then led the transition from whites-only power to majority rule.
The struggle for a nonracial South Africa threw up several leaders of extraordinary flexibility, wide intelligence, and integrity -- among them Walter Sisulu, Joe Slovo, Chris Hani, Archbishop Desmond Tutu, as well as Mandela. How one smallish country gets such a wealth of leadership at one time is a happy mystery. South Africa certainly needed all of them; not all lived to see the new democracy unfold.
***
The thorough New York Times obituary includes this reminder to those who struggle for justice:

Hating clouds the mind. It gets in the way of strategy. Leaders cannot afford to hate.

Posted by janinsanfran at 5:10 PM

Email ThisBlogThis!Share to TwitterShare to FacebookShare to Pinterest
Labels: gone but not forgotten, south africa