The world can no longer afford old people 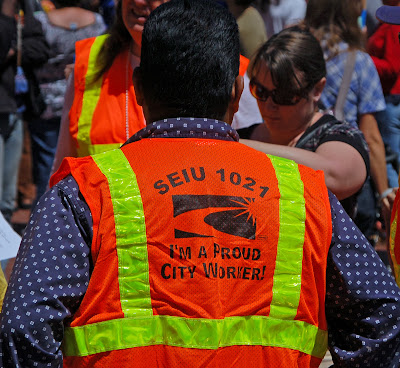 That blog headline states the message of an Associated Press story proliferating around the world as we enter 2014. Make no mistake -- there are real social strains that flow from the world's longer life spans and from growing global inequality that funnels wealth to the top of the pyramid, but that is not what articles like these are about. Articles exploring the terrible burden elders place on our societies are ideological propaganda, much like the endless din of stories about the horrors of the "national debt." They serve to soften us up for shredding whatever collective responsibility we have taken for old people.

Over the next week or so, I'm going to write a series of posts about various elements of this elder bashing campaign.

Here's a prime example: a judicial decision last month allowed the bankrupt city of Detroit to cut and escape its obligations to its retired workers. People who work for government routinely accept lower wages for the security of better benefits, including pensions. Lots of cities and states neglected to pay into pension funds adequately. Now they want to escape the consequences of mismanagement by breaking their promise to older people who can't fight back.

James Surowiecki, in the New Yorker, has provided a cogent summary of the situation.

Tis the season for taking retirement benefits away from public workers. …

… politicians often just let pension contributions slide, passing the bill on to future taxpayers. … Governments also got in the habit of promising workers higher pensions in the future so that they would accept lower wages in the present. To make matters worse, whenever pension funds looked especially robust public employees lobbied for higher pensions, and politicians were all too willing to grant them. ...

Everyone pushed off the day of reckoning, with no real thought for the taxpayers who would eventually have to foot the bill. Now that that day has arrived, you can see why governments want to claw back some of the benefits that were handed out. But this would be unjust: state and city employees worked for those benefits—teaching kids, policing the streets, and so on—and they often did so for lower wages than they would have accepted with no promise of a pension. Governments should live up to their obligations, but we can’t let them make irresponsible promises again. The temptation to defer expenditure is intrinsically hard for politicians to resist. We need reforms to control costs and to insure that governments actually pay their bills.

Surowiecki has some ideas for future remedies that don't consist of screwing old people. All government workers should fall under the Social Security system -- for historical reasons, some now do not. Moreover a federal law could mandate that whatever pension obligation any unit of government should take on, it must pay into the pension fund every year, come hell, depressed taxes, or high water. Corporations are subject to such a law; their obligations receive federal insurance in return.

Instead cities, states and other units of government can be expected to spend 2014 and decades beyond trying to to wriggle out of what they promised their former employees.
Posted by janinsanfran at 5:00 AM

Corporations did it too. Years ago the company where my husband worked just dropped the pension and it all became IRAs which they would put some money in as you did but if he had died before he retired, none of what the company had put in would have gone to me. Whether it is business or government, profit is the name of the game and some pensions were way out of line. Oregon had some folks who retired at full salary due to a temporary glitch. The price you pay for that is not being able to hire more teaches, firefighters or policemen. I can see how the young could resent the old when they see they got a sweet deal that nobody else will see-- working for private or public. Being an old person, I remember when a pension was only thought of as a way to live a life independent of moving in with the kids. Now it has to fund cruises and trips around the world or it's inferior. There should be a lot of thinking regarding how that is managed in the future-- if we have a future given the iffiness of climate change. How optimistic of me-- not. ;)