Some Occupiers kept pushing even after most of us moved on 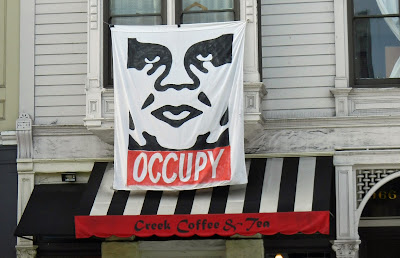 Over a year ago, I wrote here about the efforts of a group of one-time protesters who regrouped as Occupy the SEC after their encampment was forcibly cleared. They aimed to influence the rule making that would determine whether the Dodd-Frank "financial reform" would do any good. Well, the part of Dodd-Frank known as the Volcker rule has now been formally promulgated. This is supposed to force the banksters to use their own profits if they want to gamble with exotic financial products, instead of risking our federally insured deposits.

Astonishingly, Lydia DePillis reports that the SEC didn't completely blow off these organized, studious "occupiers." One of them, Akshat Tewary, explained to her:

… the number of times that they cited us suggests that regulators are subject to public oversight. It was heartening to be part of that conversation, and I think it indicates there's potential for that kind of activism going forward.

DePillis wanted to know what "Occupy the SEC" would be doing now. Apparently the Volcker measures are constraining enough so that they expect Wall Street to go straight to court to try to free itself from them.

… if there's a lawsuit that's filed, they can expect us to file an amicus brief on the other side.

I'm grateful for the willingness of these folks to dig into the weeds of financial policy; this sort of expertise is not all it takes for change (and the Occupy the SEC folks know that) but not having this sort of competence limits any progressive reform movement.
Posted by janinsanfran at 5:00 AM