Yemen: a story from yet another failed U.S. conflict zone 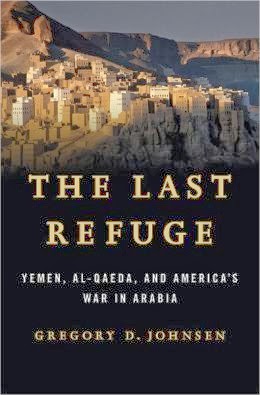 A morsel of conventional advice hammered into aspiring writers is "show don't tell." Gregory D. Johnsen's The Last Refuge: Yemen, al-Qaeda, and America's War in Arabia does exactly that. It wasn't until I'd finished the book that I fully took in its narrative power. The former Fulbright Fellow in Yemen carries his readers along on a fast-paced ramble through the history of this desert country on the south coast of the Arabian peninsula, its homegrown and imported Islamic terrorists, and the United States' fumbling, inconsistent responses.

Much of this terrain was familiar to me, having read FBI agent Ali Soufan's account of his investigation of the USS Cole bombing and having seen the movie version of Jeremy Scahill's expose of the U.S. drone campaign, Dirty Wars. But this was different, integrating a much more nuanced explication of Yemen's enormously complex tribal society which serves as a seed bed for AQAP's (al Qaeda in the Arabian Peninsula) flourishing. Many familiar, and far more unfamiliar, names flew by in Johnsen's story; what sets this account apart is that Johnsen conveys through vivid narration far more of the interior logic that drives all the actors than any other account I've read.

As a citizen of a country that Johnsen portrays as having chosen to ape the indiscriminate violence of the terrorists through our drone strike campaign -- hey, we just wiped out a wedding party this week -- what interested me most was Johnsen's picture of the incentives that pushed our political leaders in that direction. Only some of them seem to have been undiscriminating racist war hawks. Others simply drifted into what seemed the least bad option in the context of a U.S. population that demands they guarantee absolute security against terrorist threats. If Johnsen is accurate, and he certainly seems knowledgeable, our drone campaign has only made sure there will be more terrorists.

Unfortunately, I "read" the volume as an audiobook and was surprised to discover that neither of the two libraries I have access to owns the volume. They should. This is an important story. I usually go to print editions to pass on the flavor of books here. Fortunately I can share a taste of Johnsen's conclusions from a recent Foreign Policy article. He faults U.S. policy makers for failing to understand that combating Arab terrorists on their own turf in Yemen is very different from killing expatriate Islamist Arabs in Pakistan and Afghanistan. He thinks the U.S. has mesmerized itself through focusing on a succession of known leaders rather than seeking to understand the local organizational structures AQAP has built. He concludes

The Obama administration's counterterrorism approach in Yemen is primarily concerned with preventing an immediate attack directed at America or its interests in the Middle East. This is a short-term goal that eclipses everything else, from long-term strategy to the stability of Yemen itself. The United States has yet to realize that this is not a war it can win on its own. Only the tribesmen and clerics in Yemen are in a position to decisively disrupt, dismantle, and defeat al Qaeda.

The United States can do a lot of good in Yemen, but it can also do a lot of harm. And right now it is playing a dangerous game, firing missiles at targets in the hopes that it can kill enough men to keep AQAP from plotting, planning, and launching an attack from Yemen. … it may be time to rethink that approach in favor of a strategy that's more sustainable -- and more sensible too.

I could add also less randomly cruel. Johnsen doesn't go in for that sort of judgment, but I do.
Posted by janinsanfran at 5:00 AM

The Last Refuge is available for $3.79 on Amazon download. I just got it on my Kindle.