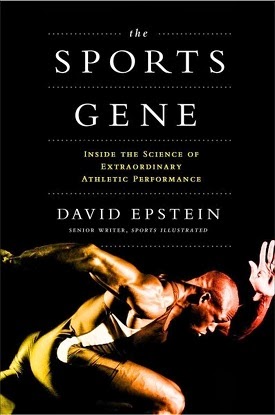 I find it intriguing to try to imagine how The Sports Gene: Inside the Science of Extraordinary Sports Performance by David Epstein will hold up in ten years. The Sports Illustrated senior writer has digested the current state of genetic and sports knowledge and presents a vast compilation of that research in accessible, journalistic prose. I enjoyed it and learned from it. We're beginning to know a great deal about who is born with what sort of athletic capacities and what training can do to enhance that genetic inheritance (often as not much as we hope.) But the field is advancing so rapidly that many current conclusions may look primitive in the near future.

What's less likely to change is that this sort of research into human capacities will have us delving into terrain that can be upsetting to accepted social varities. The book's website offers a list of such touchy questions:

1. Are black athletes genetically predetermined to dominate both sprinting and distance running, and are their abilities influenced by Africa’s geography?

2. Are there genetic reasons to separate male and female athletes in competition?

3. Should we test the genes of young children to determine if they are destined for stardom?

4. Can genetic testing determine who is at risk of injury, brain damage, or even death on the field?

And we worry about "tracking" in education -- the practice of separating students into different levels largely based on performance on standardized tests! Think what we might do to people if our use of genetic information is ill-considered or simply bigoted. Yet we're going to find out.

Can better understanding of the implications of our individual, inherited genes -- who is naturally super fit (6 in 1900 according to one study) and who is a naturally high responder to athletic training (perhaps not the same individuals) -- end up reducing participation to only those few who happen to have been born with a particular positive genetic profile? Historically we've identified who will get the best results in which sports with a lot of trial, error and accident. But in the context of the "winner-take-all" market in sports (a concept Epstein credits to Robert H. Frank) will there be any room for the merely enthusiastic mediocre athlete?

As the customer base for viewing extraordinary athletic performances expanded, fame and financial rewards slanted toward the slim upper echelon of the performance pyramid. As those rewards have increased and become concentrated at the top level, the performers who win them have gotten faster, stronger, and more skilled.

Sure, that's how a market is supposed to work: sports uncover winners and we delight in the performances of these genetic outliers.

According to the National Center for Health Statistics only about 20 percent of us in the United States get the quantity of exercise that is currently considered healthy. (I'm not convinced that we have a scientifically based definition of what healthy activity would require for particular individuals, but I'm sure some kind of activity is healthy.) We've evolved a civilization in which exertion is optional. We aren't about to revert to painful drudgery if we can help it.

To survive in the social context we've created, we need to find ways to identify what activities might provide satisfaction to non-elite individuals. The potential to do this is implicit in the research Epstein describes; let's hope we choose to advance in that direction at the same time we devote resources to the few who can stretch the limits of human performance. What we do with the insights of performance genetics will be about social choices we make; that's a feature of being human in the age of the Anthropocene.
Posted by janinsanfran at 5:00 AM

Email ThisBlogThis!Share to TwitterShare to FacebookShare to Pinterest
Labels: annals of the anthropocene, booktalk, science

Well, we can keep in mind that the race is not always won by the swiftest.