"And there was no room for them in the inn …" 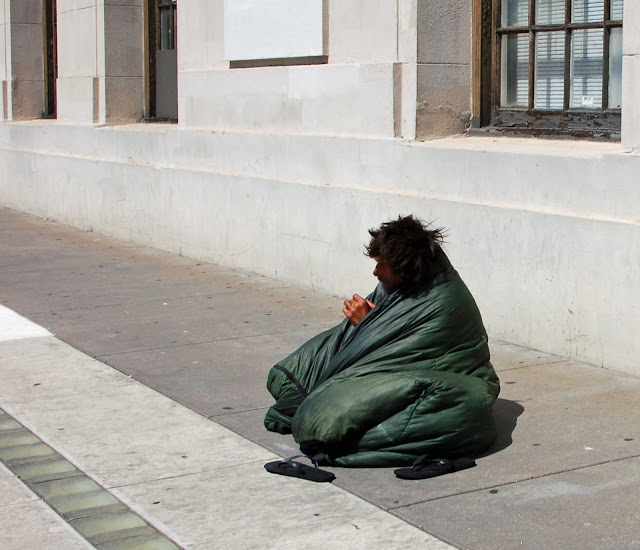 Last June, the San Francisco Human Services Agency reported 6,436 homeless people in the city, of whom about 3400 lived on the streets. The rest were in shelters or otherwise in contact with "the system." Activist groups like the Coalition on Homelessness have long charged that HSA's numbers are way too low. This seems likely. Who wants to be counted by the man when on the street? 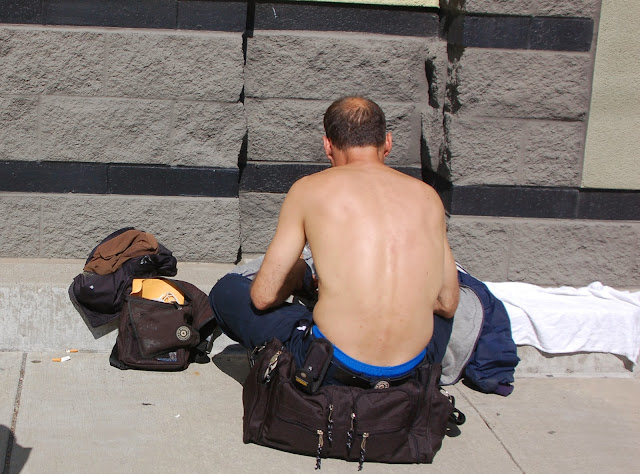 Most of the "homeless" work at least part time. They just don't have a stable place to live, so they and their meager belongings end up outside. That sure fits with what I know of the lives of the people I've known who would be categorized as "homeless." It might be more accurate to say they have been "intermittently housed," sometimes crowded into dingy lodgings or single room occupancy hotels, sometimes in charitable or social service agency shelters, occasionally in jails -- and when all else fails, on the streets. 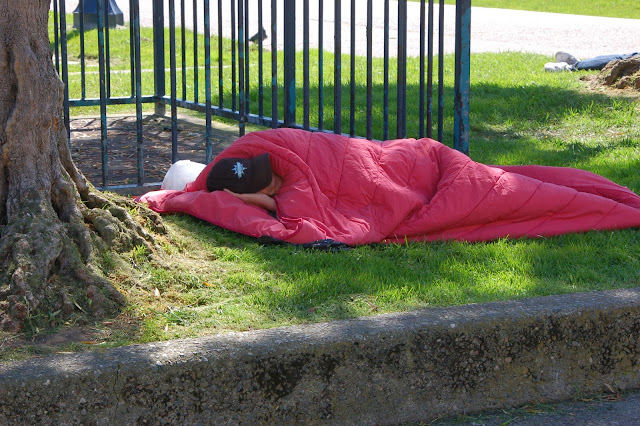 Recently we've had one of our periodic legislative bouts of kicking homeless people when they are down. Supervisor Scott Weiner came up with an ordinance to criminalize simply being in a park from midnight to 5am. Understand, it is already illegal to sleep in parks and the police readily admit they don't have the personnel to enforce that law, but hey, we need to give them another tool to criminalize poverty, don't we? 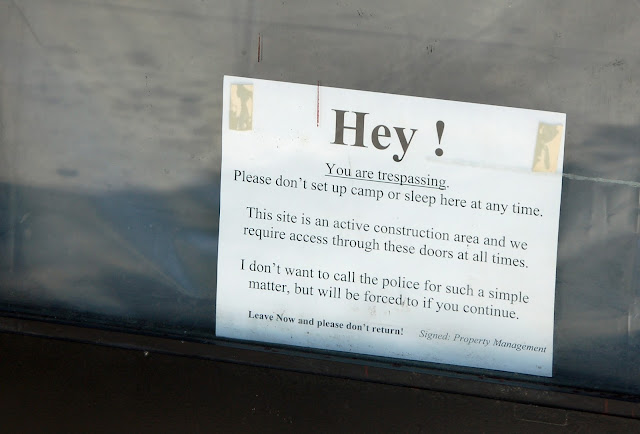 Sometimes we have tolerant instincts. 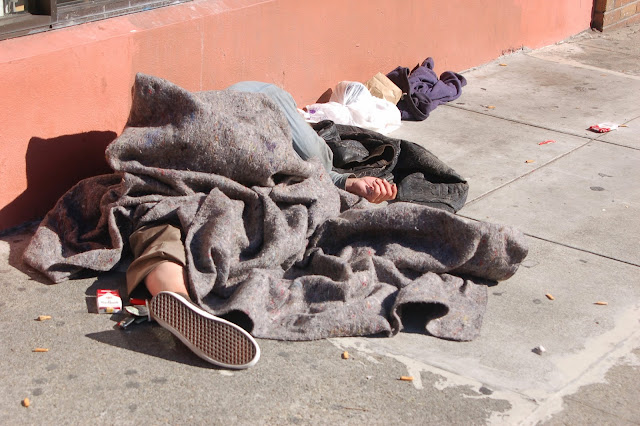 I have qualms about photographing people who appear to be living on the streets when I walk about San Francisco. Yet I take pictures of other people who appear more affluent walking their dogs, exercising, working outside … Street people have no refuge from my camera. I try to be respectful. After all, these are people. And certainly are these people are part of the San Francisco scene. 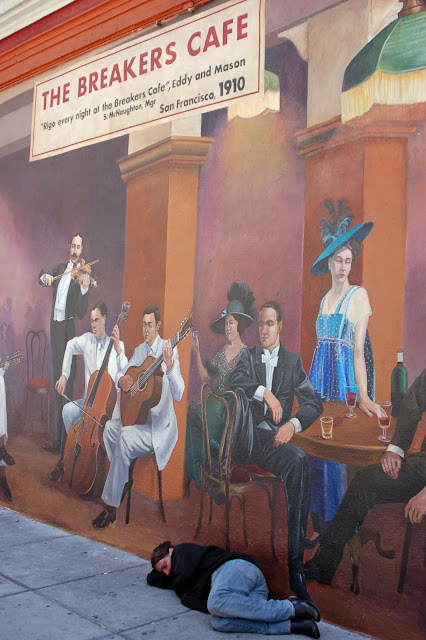 As a society, we know how to end homelessness: put people who don't have housing into houses. Yes, it is that simple, as well as cheaper and more humane than our labyrinthine social service bureaucracy. As formerly homeless author and journalist Charley James cogently explains, homelessness is "Cheaper to Fix Than to Let Fester."
Posted by janinsanfran at 5:00 AM

how would you fix it if you think we know how?

I remember my grandmother talking about men coming by the house for food during the Depression. She and my mother talked about the hobo camps in Portland right after WWII. A few of those men were dangerous to each other and the neighborhoods they were near as my mom had a frightening experience with one of them that worked out okay but it was because she had a growling pitbull dog at the time.

Men who are heavily into drugs or alcohol, who can't or won't hold down a job have always been with us. Some are mentally ill possibly from the drugs or the drugs come because of the mental illness like The Soloist regarding a true story of the gifted musician on the street and the reporter who tried to help him but found it was dangerous doing so.

Sometimes the ones on the street can appear threatening. Mostly it's sad and just a difficult situation to figure out and I don't see any easy answers.

Put them all in shelters and you are responsible for what they do to each other. Who goes among them to keep it safe and clean? Allow for homeless camps and again same problem. Public parks to urinate and sleep in become a health hazard. What is the answer that actually works?

Better working jobs, raising the minimum wage to $15 would help for those on the lower tier who can work but what about those who simply can't or won't? We drive into one of the food markets and always a couple are on one or another corner with their dog and the sign. I see a lot of that in one of our nearby towns but not much in the other as the police probably have a different approach to it. Rest areas along the freeway can be threatening as they are sitting there, half the time with a dog, the beater car nearby, and the ever-present handmade signs. You really never know is this going to be a confrontation.

I have had a few intimidating experiences in Portland when by myself. Once it was near a homeless shelter and I was heading for the bookstore which is in a rather bad neighborhood. Two drunks were yelling crude things at me when they were on one side of the street and me on the other. The guy standing beside me walked across against the light to avoid being with me when I crossed. The drunks didn't do anything more when I passed, but a person has to wonder if they had, who would have helped? Another time I was walking up to the Portland Art Museum by myself when I had been staying at a downtown hotel and saw a man huddled with a blanket in the door of a building. He wasn't asking for money and truthfully I wasn't sure how safe it was to walk by him as when i looked at him to assess it, his eyes looked blank, probably still high on something. Some of these guys are mentally off and anything can trigger a reaction. It is intimidating.

What I didn't used to see were the beggars on the street. The first time i ever saw that I was in Mexico and a grown woman. Now it's a fact of life. I never honestly know what to do when I see them with the sign-- and I see them pretty regularly. It's hard to give money when driving by in a car. In towns where I know I'd run into it, like Portland, (and frankly with my husband who is a big man) I often carry a few dollars in my coat pocket making it easy to give without opening a purse or wallet, but whether that's doing anybody a favor is highly debatable. Some people carry gift cards but I bet a lot just get exchanged for the money not the food.

Some of the men I see (women too) really do look like they could work but some literally wouldn't be hired by anybody. Some don't want to be in shelters because they refuse to live by any rules.

It's true that it is very hard in our current stressed out society to know how to deal with people who are mentally ill, addicted, or who for some reason find themselves without any kind of a supportive family, of blood or affinity.

But when cities put their minds to it, they can make progress -- by simply putting hard core homeless people into homes! Phoenix claims to have succeeded in getting all chronically homeless veterans (a big chunk of the male unhoused population) into housing. Here's that story.

Rain -- I very much agree with you: growing up in the 50s, I never saw beggars. Now we do. There isn't enough unskilled work to go around nor enough housing. According to this Atlantic Magazine article, there was actually a surplus of affordable housing in 1970; that would have been when I was living adjacent to the Bowery in New York. There were still a lot of single room occupancy residences then. Now that sort of use is squeezed out by the demands of those who can afford more.

Once upon a time, there were apparently odd (probably quite unpleasant) niches for people who fell out of society -- in corners of stables for example. Or under bridges. We are apparently making more such people who have less places to turn than previously. But the fact remains, if we don't want them on the streets, we need to house them. They are people.

Projects were intended to do that in some areas and they turned into crime nests and traps for the ones forced to live in them like what we seen in chicago. I will see if Phoenix is right if we go through there on our way south. We might not but they had a unique situation with a ton of homes being deserted and in the banks' hands. Las Vegas had that also due to the housing bubble. The issue though is will it work long term or find that in that neighborhood, you created a disaster of crime and pestilence due to people who won't maintain themselves or property. It's not simple and in a nation that values freedom, what you do about mental illness has been dicey. We saw a homeless guy at a rest area driving south but he wasn't threatening, did have the usual dog and was getting money including from us. He was middle aged so could have been a vet.